AL-KAFI #1004: MUSAFIR PRAYERS (JAMAK AND QASAR) FOR THOSE WITH TWO HOMES 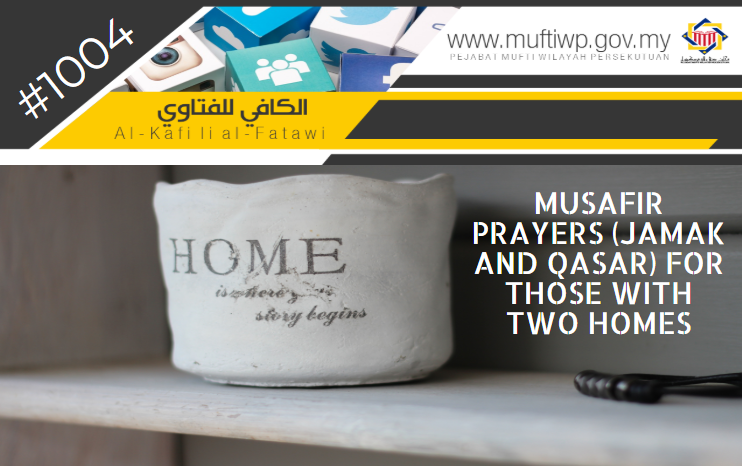 I want to ask a question. I work and rent a house in Muadzam, Pahang. If I went back home in my hometown in Kuala Lipis, Pahang (the house is mine; under my name, but my parents live there) in which I would only return home once a month, is it permissible for me to perform jamak and qasar? The distance for the journey is more than 82 km and I would go back home for less than 3 days excluding the day of travels (arriving and leaving my hometown). I do intend to return home and work there but there is no definite date as to when this will happen.

Assalamualaikum. I want to ask regarding the prayers of a traveler.

Me and my wife are in a long-distance relationship in Kelantan and Kuala Lumpur and I’ve already bought a house in Kuala Lumpur. Usually, I would only go back for the weekend either on Friday or Saturday. My question is, is it permissible for me to perform jamak and qasar throughout the weekend?

The issue of jamak and qasar prayer is a recurring question presented to us. Hence, we have published several articles related to this issue such as Al-Kafi #513: The Time for Jamak Qasar Prayer, Al-Kafi #927: Jamak and Qasar Prayer in the Office, Al-Kafi #923: The Ruling of Jamak and Qasar Prayer at the ETS Station Before Starting on One’s Journey, Al-Kafi #926: The Calculation of Days of Arrival and Leaving Days In the Rulings of Traveller’s Prayers (Jamak and Qasar). This time, we will explain the rulings of prayer for a traveller for those who own or have two or more homes.

We will start by explaining the related terms for a better understanding in explaining this issue. What is meant by a mastautin and a muqim?

A mastautin (resident) is defined with the meaning “a person residing or living in a certain place and has no intention to move to another place.” (Refer 2nd edition Kamus Dewan Bahasa and Pustaka). This definition is not different from the definition according to the syarak ruling which states:

While for a muqim, it means a traveller staying in a certain place for more than three days, but do not have the intention to stay there forever. (Refer al-Muhazzab fi Fiqh al-Imam as-Syafie, pg. 195)

For example, Aziz Rusydi went to Malacca for 2 days for his work, then return to Brickfields, Kuala Lumpur. Hence, the two days in Malacca including the days of him arriving and leaving Malacca, it is permissible for him to perform jamak and qasar for his prayers and it is not wajib for him to perform the Friday prayer (Refer Al-Kafi #926: The Calculation of Days for Jamak and Qasar)

And when you travel throughout the land, there is no blame upon you for shortening the prayer,

Thusly, are the definitions of the related terms in this issue. Referring to the first question, it is clear that Muadzam is not where he resides, for he himself has the intention to return and work in Kuala Lipis. While a resident is a person who lives in a certain place without any intention to move to another place. Hence, for this situation, Kuala Lipis is a watan(hometown) for him, thus, it is impermissible for him to perform jamak and qasar, even when he only returns there once a month or a year. However, it is permissible for him to perform jamak qasar during his travels (him on the road) for the distance between Muadzam to Kuala Lipis exceeded 2 marhalah. Likewise, for the opposite, if the distance for the journey is less than 2 marhalah, then it is impermissible for him to perform jamak and qasar. This is in line as agreed by scholars from among the scholars of madhhab Syafie:

For the second question, he is in a long-distance relationship with his wife while he is working in Kelantan and his wife is living in a house he bought in Kuala Lumpur. Weekly, he would visit his wife in Kuala Lumpur. Hence, in this issue, it is impermissible for him to perform jamak and qasar during the weekends every week because his wife lives there. It is permissible for him to perform jamak and qasar during his travels, for the distance between Kelantan and Kuala Lumpur exceeds 2 marhalah. This matter is in accordance with the ijtihad of the jurists in issuing the fatwa regarding a person who has 2 different homes in two locations. The conditions for this issue is stated by Imam Ibnu Hajar Haitami as the following:

“The ruling of a person who went out for parts of the year to their lodgings and the rulings of a person who has 2 houses in 2 different states: The conclusion that we have considered are:

Likewise, in a situation where a husband has several wives and each of his wife are given a house as a place of residence.

For example; Aziz Rusydi has 4 wives and each of them are given a house for them to live in. Each of them lives with a distance of more than 2 marhalah from each other. Hence, every time Aziz Rusydi visit any of his wives’ house, it is impermissible for him to perform jamak and qasar for there lives his family or wife.