AL-KAFI #1009: DURING PRAYER, ONE BECAME DOUBTFUL OF HIS INTENTION 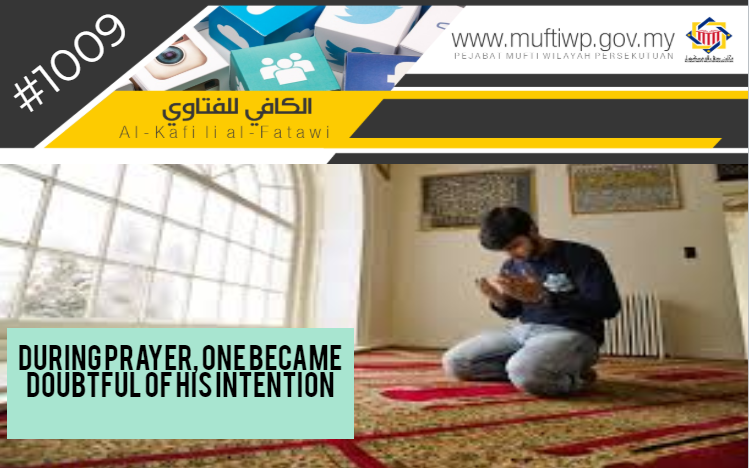 Assalamualaikum SS Dato’ Seri Mufti. If someone is praying Zohor and in his second rakaat, doubts start to creep in, as to whether he set the intention of praying Zohor or Asar. After some time, he is certain that his initial intention is Zohor. Is his prayer valid?

We will start with a hadith from Umar bin al-Khattab RA, where he said, I heard the Prophet PBUH said:

Among the wisdoms from the above hadith:

Intention is one of the direct requisites in intrinsic or direct worship (العبادة المقصودة), such as prayer, hajj and fasting. All these worships are invalid unless with the presence of intention. While, for extrinsict or indirect worships or a means for worship such as ablution and ghusl (bath), then the scholars of madhab Hanafi state that intention is just a condition of the perfection of worship to gain its rewards. For scholars of madhab Syafie and others, they state that it is a valid condition for worship. Hence, indirect worships are invalid without intention.

Answering the above question, certainty cannot be removed by subsequent doubt. This is in line with the Islamic legal maxim:

“Certainty cannot be removed by doubt.”

Ibu Nujaim said: “It is impossible for a doubt to remove a certainty that precedes it.” (See: al-Asybah wa al-Naza'ir by Ibn Nujaim, pg. 56)

Hence, when someone is praying and then doubt, then the doubt is not considered and the prayer is valid.

Syeikh Daud al-Fatani in his book stated: “Doubt that come in when one is praying does not harm the prayer after certainty comes afterwards.” (See Lihat Furu’ al-Masa’il tahqiq by Datuk Seri Abu Hasan Din al-Hafiz, pg. 321)

We hope that Allah SWT accept all of our prayers by following the conditions set by syarak and being sincere towards Allah SWT. Allah SWT stated:

“And they were not commanded except to worship Allah, [being] sincere to Him,”

Imam Nawawi Rahimahullah explains regarding the matter of worship and good intention saying: Indeed, worship is divided into three parts:

Hopefully, this explanation will make us be conscious in the fiqh of prayer according to syarak. Amin.