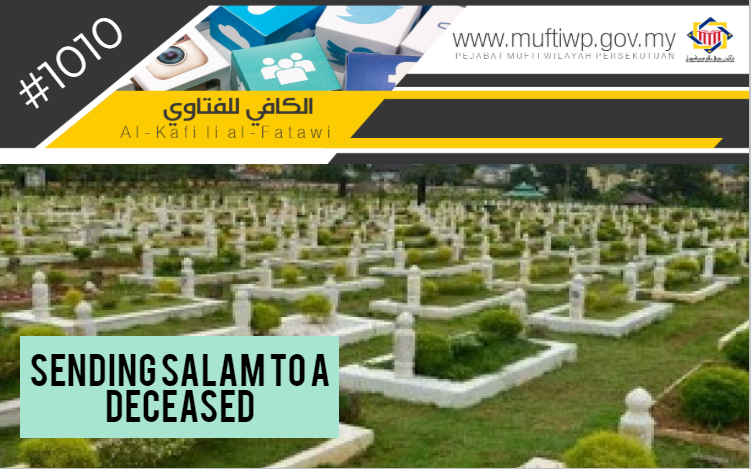 Assalamualaikum SS Dato’ Seri Mufti. I want to ask, what is the ruling of someone who sends his salam to his friend who are visiting the grave of their deceased friend but could not go together to visit the grave. Hope for an explanation from you. Thank you.

It is narrated that Umar bin Abdul Aziz once was asked to convey salam to the Prophet PBUH and he did so. This is narrated by Taqiyuddin al-Subki in his book Syifa' al-Siqam (pg. 58) from Ibn Abi ‘Asim who authenticates the story. Some scholars state that there are two chain of narrators (sanad); which are from al-Baihaqi in his book Syu’ab al-Iman (3870) and (3869). This narration is also mentioned by Ibn al-‘Arabi in al-Qabas (1/423). Considering he is a renown and knowledgeable caliph as well as a pious and scholar of Islam, his actions are taken into account for two reasons:

As for other scholars, it is not a popular practise.

Regarding the souls of the believers when they are in Barzakh, then they are able to meet each other.

Ibn al-Jauzi stated in Bustan al-Wa’izin, the souls of the believers will meet. This is in accordance with the hadith:

“When the souls of the believers are taken, surely they will meet other believers’ souls with blessings and good news just as an estranged family member meeting his family again. Then, they would welcome him and said: What is so and so doing and what happened to him?”

This shows that for believers, their souls will be able to meet and talk to each other. They would even ask about their friends who are still alive.

Regarding sending salam to the Prophet PBUH, it is said that no matter what the distance is, it will reach the Prophet PBUH. This is in accordance with numerous evidences, one of them is:

"The Messenger of Allah (ﷺ) said: 'Allah (SWT) has angels who travel around on Earth conveying to me the Salams of my Ummah.'"

Thus, some scholars are of the opinion that it is unnecessary to send salam to the Prophet PBUH for anyone who recite the praise and salutations of the Prophet PBUH then it would have automatically reached him.

Since the issue is khilafiyyah (scholars have differing opinions on it) issue, we are inclined towards the opinion that state that it is unnecessary to send salam to anyone who is visiting graves for there are no evidence supporting this actions nor it is practised by the salafussoleh with the exception of salam to the Prophet PBUH.

Hopefully, Allah SWT will make us be from among those who love one another that will lead us to paradise.