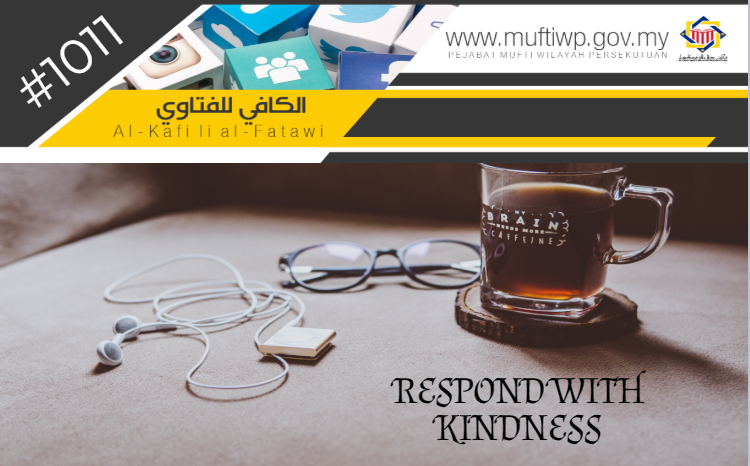 Assalamualaikum SS Dato’ Seri Mufti. Can you comment on verse 34 of surah Fussilat?

“Repel [evil] by that [deed] which is better; and thereupon the one whom between you and him is enmity [will become] as though he was a devoted friend.”

“Repel [evil] by that [deed] which is better; and thereupon the one whom between you and him is enmity [will become] as though he was a devoted friend.”

Ibn Kathir said: If someone hurts you, then respond with kindness. This is in accordance with the words of Saidina Umar RA: “Abstain yourself from replying someone who wronged you for it is an obedience towards Allah SWT.”

And Allah SWT states: (فَإِذَا الَّذِي بَيْنَكَ وَبَيْنَهُ عَدَاوَةٌ كَأَنَّهُ وَلِيٌّ حَمِيمٌ) “when you do as such, then someone who holds an enmity towards you will immediately be your best friend. Which means, if you respond kindly towards someone who hurts you, surely, he will change his attitude towards you and treat you kindly, become fond of you and misses you, as if he is a dear friend of yours, growing closer towards you with love and goodness.” (See Tafsir al-Qur’an al-‘Azim, 4/123)

Saidina Ali bin Abi Talib RA advised his former slave saying: “O Qunbur, ignore those who insults you and forgets about it. Allah SWT will surely bless you and it will lead to the anger of the shaytan.” There are some people who state, response towards a fool is staying silent.

A poet once said: “For a fool, don’t insult or reprimand him. Silence is his worst nightmare.”

Another poet said: “A fool loves responses. Confront them not with words. Silence is the answer.”

While, Syeikh al-Maraghi said: Stop the ignorance and foolishness of the disbelievers kindly. Which means, respond kindly towards their hurtful words and actions with forgiveness and face their anger with patience. The reason is, if you continue with your kind and good conduct, they will be ashamed by their own actions and stop behaving that way. (See: Tafsir al-Maraghi, 12/6073)

Abu Bakr Ibn al-‘Arabi said: The above verse is specific towards the disbelievers and seeking revenge towards them. However, it is a general commandment of how we should behave among the Muslims. For the phrase: “Repel [evil] by that [deed] which is better,”, there is an opinion that state it is also a commandment of when we become unmindful towards Allah, then we should make up for it with zikr, as stated by the Prophet PBUH in a hadith from al-Aghar al-Muzani:

“There is (at times) some sort of shade upon my heart, and I seek forgiveness from Allah a hundred times a day.”

The sufi said: “The meaning of the verse includes, reject worldly gains when it hinders the rewards of the hereafter.”

Ibn al-‘Arabi said, Abu Bakar al-Fihri (his teacher) told him: “When two matters are presented to you, where one is for this world and the other is for Allah SWT, then prioritize the one for Allah SWT, for only then you will gain them both. But if you prioritize you worldly matter, then you will lose them both or you may attain your worldly gains but it will not be blessed.”

Ibn al-‘Arabi practised this advice and found it to be true. Furthermore, the meaning of the above verse also includes to prevent oneself from being rude, harsh and unforgiving. This is clear through the supplication of the Prophet PBUH:

“O Lord forgive my people, for they do not know.”

The wisdom from the verse is: Live as a charitable man without hoping for any return from people. The verse also means to always offer salam to those who refuse to offer salam to you and other examples, but the main motive is known (by all); to always be kind. (See Ahkam al-Quran by Ibn al-‘Arabi, 5/593-595)