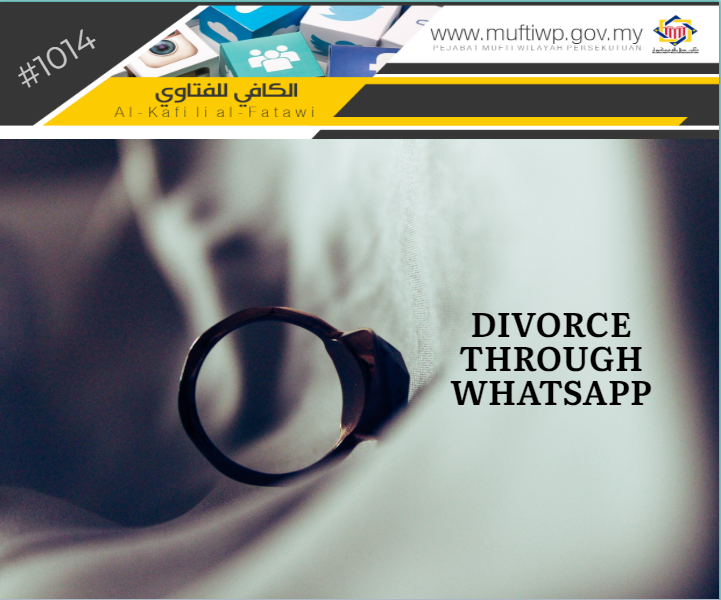 What is the ruling of divorcing one’s wife through Whatsapp with the supposition that his wife committed adultery with another man?

Before we answer this question, we would like to first explain the meaning of talak. Talak (divorce) will only be valid when a husband enunciated the words of talaq to his wife, formally repudiating his wife, whether it is sarih (clear) or kinayah (vague) if it is with intention. There are no exceptions in syarak regarding this in normal times, when fighting or when one is just joking. This is in accordance with a hadith from the Prophet PBUH:

“There are three things which, whether undertaken seriously or in jest, are treated as serious: Marriage, divorce and taking back a wife (after a divorce which is not final).”

As stated above the words of talaq is divided into two; sarih (clear) and kinayah (vague). For sarih talaq, there are three words when enunciated then the talaq is valid, which are divorce, separate and letting go. Imam al-Baijuri said:

“Sarih (clear) talaq does not need intention. The intention to validate talaq, for there is no possibility that it is not talaq.” (See Hasyiah al-Baijuri ‘ala Syarh Ibn al-Qasim ‘ala Matan Abu Syuja’, 2/263)

While for kinayah (vague) words of talaq, then it depends on the intention of the husband. Ibnu al-Qasim al-Ghazzi said:

According to the above question, we would say that talaq through whatsapp is considered as kinayah (vague) and not sarih (clear). This is in accordance with the decision by 59th National Council on Islamic Religious Affairs Committee; talaq in written words and send specifically to his wife through fax, SMS, email and others is considered as kinayah (vague) talaq and it is valid if it is his intention (to divorce his wife). All divorce proceedings should be presented to the Syariah court to be finalized. Talaq through modern communications is a method for talaq that contradicts the manners of talaq set by syarak.

Hence, in answering the above question, we would state that if a husband sends it without the intention to divorce his wife, then the talaq is void. Moreover, regarding the question asked, if the talaq include ta’liq, which are words written with a condition that would cancel the marriage if something that contradicts the condition happens; such as a husband set a condition that only if the wife committed adultery, only if the wife really committed adultery that the talaq will be valid. However, the Federal Territories Syariah Court asked couples to file the application for the finalization of divorce cases involving talaq through simple messages in Syariah courts near their place of residence if it happens. May Allah SWT give us happiness in our marriage. Amin.