AL-KAFI #1024: THE RULING OF RECITING THE QURAN AS A CURE 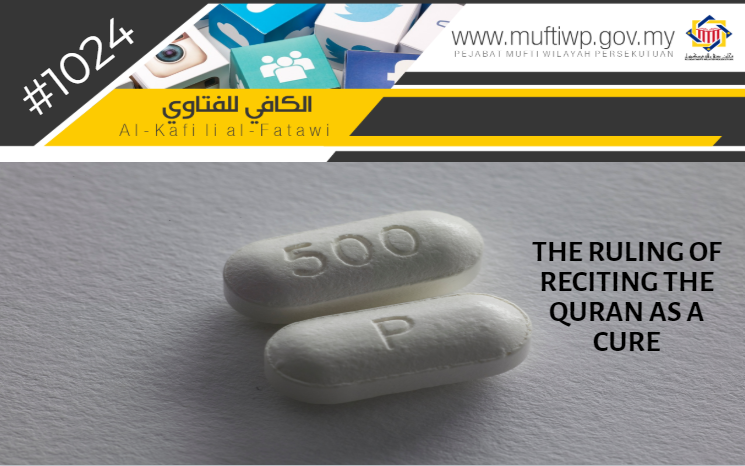 Assalamualaikum SS Dato’ Seri Mufti. Is it true that the Quran is a cure and is it permissible for us to recite the Quran for the sick?

“And We send down of the Qur'an that which is healing and mercy for the believers,”

Qatadah commented on the above statement of Allah SWT: And We send the Quran gradually as a cure and blessing, stating: The believers listen to the words of Allah WT, then they benefit from it, memorizing it and contemplating over it. (See: Tafsir al-Maraghi, 8/4014)

Answering the above question, fiqh scholars state that it is permissible to ask for cure through the recitation of the Quran. Ibn Abidin said: It is permissible and it has been practised by people to this day for it is stated in hadiths and athar.

Imam al-Nawawi said: It is sunnah to recite the Fatihah when one is sick according to a hadith of the Prophet PBUH:

“How do you know that Surat-al-Fatiha is a Ruqya?”

The advantages of al-Fatihah is stated in a hadith where a companion of the Prophet PBUH named Sa’id al-Khudri who recited it in an effort to cure a tribe leader who has been stung by a poisonous animal and with the will of Allah SWT the tribe leader is cured. This story is recorded in the following hadith:

“Some of the Companions of Allah's Messenger (ﷺ) set out on a journey and they happened to pass by a tribe from the tribes of Arabia. They demanded hospitality from the members of that tribe, but they did not extend any hospitality to them. They said to them: Is there any incantator amongst you, at the chief of the tribe has bgen stung by a scorpion? A person amongst us said: 'Yes. So he came to him and he practised incan- tation with the help of Sura al-Fatiha and the person became all right. He was given a flock of sheep (as recompense), but he refused to accept that, saying: I shall make a mention of it to Allah's Apostle (ﷺ), and if he approves of it. then I shall accept it. So we came to Allah's Apostle (ﷺ) and made a mention of that to him and he (that person) said: Allah's Messenger by Allah, I did not practice incantation but with the help of Sura al-Fatiha of the Holy Book. He (the Holy Prophet) smiled and said: How did you come to know that it can be used (as incactation)? - and then said: Take out of that and allocate a share for me along with your share.”

Regarding the using of the Quran through writings or names of Allah SWT or is also known as nasyrah, then it is washed with water and wiped on the patient or drank is permissible according to Sa’id bin al-Musayyib. (See: Tafsir al-Qurtubi, 10/318 dan al-Adab al-Syar’iyyah, 3/73)

The same opinion is stated by madhab Hanbali some scholars of al-Syafie, among them are al-‘Imad al-Nihi, the student of al-Imam al-Baghawi who said: It is impermissible to swallow a piece of clothing with the writings of the Quran, but if it is washed and drank, then it is permissible. This is stated by al-Qadhi Husain and al-Rafi’I who ruled any food that has the writings of the Quran on it. (See: al-Burhan fi Ulum al-Quran, 1/476, Kassyaf al-Qina’, 2/77, Syarh Muntaha al-Iradat, 1/320 and Matalib Uli al-Nuha, 1/836)

Ibn Abd al-Bar said: al-Nasyrah includes medication from the washing of something. It is the same as the ablution water of the Prophet PBUH. (See: Tafsir al-Qurtubi, 10/319)

Although this is a khilaf (scholars have a difference of opinions) issue for it is restricted by al-Hasan and Ibrahim al-Nakhaie, but other scholars ruled it permissible according to the hadith from Jabir bin Abdillah RA, where the Prophet PBUH said:

“He who is competent amongst you to benefit his brother should do so.”

Hence, the Quran is truly a cure and syifa’ for sickness. May Allah SWT protect us from any chronic illness and make us from among those who loves the Quran.