AL-KAFI #1025: WEIGHING THE HAIR OF A NEWBORN: WORSHIP OR CUSTOM? 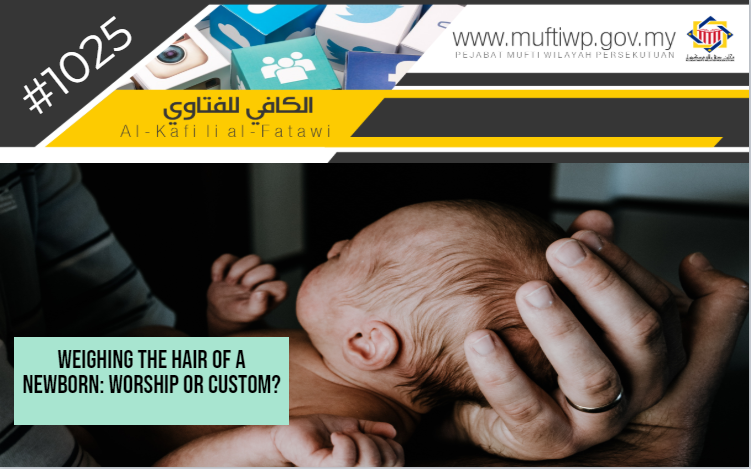 Assalamualaikum SS Dato’ Seri Mufti. I would like to know, what is the ruling of weighing the hair of a newborn baby? Is it just a custom or sanctioned in Islam?

The word aqiqah (العقيقة) comes from the word al-‘Aqqu (العق) which literally means cut. Originally aqiqah is the name of the hair of a newborn baby. It is named as such for it will be shaved or cut.

Answering the above question, the act of shaving the hair and weighing it to donate the equivalent value of it in silver is a sanctioned worship in Islam stated in the hadith of the Prophet PBUH. Hence, it is a worship and not just a custom.

Here, we include the opinion of our teacher in his book al-Fiqh al-Manhaji (2/299), where he said: It is sunnah to shave the hair of a son or daughter after the slaughter of aqiqah on the seventh day of birth and then donate the equivalent weight of gold or silver with the weight of the hair.

This is in accordance with a hadith from Saidina Ali RA where he said, the Prophet PBUH slaughter a goat for the aqiqah of Hasan and then said:

Syeikh al-Mubarakfuri said: The above hadith is an evidence that it is sunnah to donate the value of the weight of silver equivalent with the weight of a newborn. (See Tuhfah al-Ahwazi, 5/115)

This is a sign of our appreciation and gratefulness for the birth of a baby and our happiness through donation. This will bring about blessings in our lives and also a great starting point for the life of the newborn getting close to Allah SWT, pleasing the hearts of others.

Let us together supplicate to be blessed with pious and righteous children which will then lead to Baiti Jannati.