AL-KAFI #1037: THE RULING OF EATING THE SKIN OF UNSLAUGHTERED COW 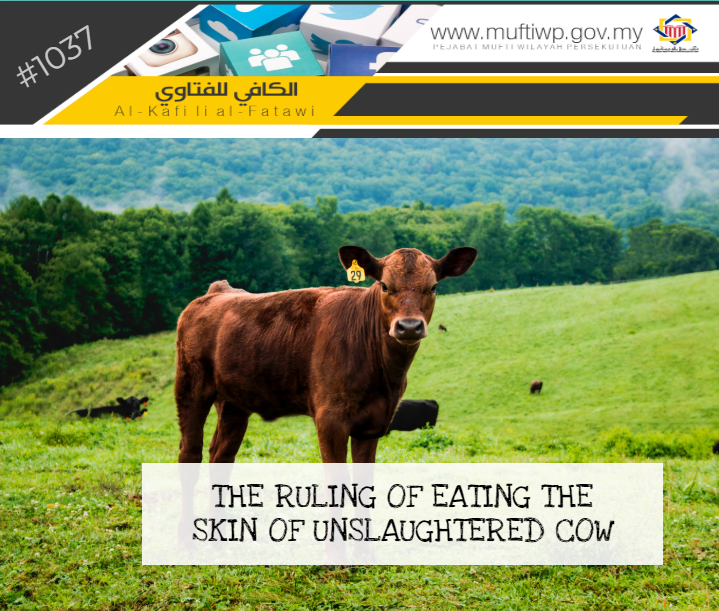 Ustaz, I once heard that it is permissible to use the skin of a dead unslaughtered animal which has been tanned and it is pure. The issue is, is it permissible for us to eat the skin of such animal skin which is done by some people who eat these types of cow’s skin?

In Tafsir al-Jalalain (pg.217), “the evil” is commented to mean carcasses and others similar to it. He states in Raudoh al-Tolibin (1/42): “And it is permissible to eat the skin of animal that has been tanned according to qaul jadid (more recent opinion of Imam al-Syafie), if the animal is permissible to be eaten. If not, the opinion in the madhhab stated it as prohibited. I said: The azhar (stronger) opinion is, it is prohibited to eat the skin of the animal.”

However, this is a khilaf (scholars have differing opinions regarding this matter) issue in madhhab Syafie, for Imam al-Rafi’e did not prohibit it and is inclined towards the jadid opinion of Imam al-Syafie. Syeikh Abu Bakr al-Hisni states in Kifayah al-Akhyar (pg. 18): “Is it permissible to eat animal skin from animals that are permissible to be eaten (but is not slaughtered)? Al-Rafi’ie state it is permissible while al-Nawawi prohibits it.”

We are inclined towards the opinion that state that it is impermissible to eat animal skin that is not slaughtered, but we should benefit from it by making it into clothes and adornments. However, if there is a necessity or exigent circumstances, then it is permissible to be eaten, just as it is permissible to eat or drink prohibited food and drink such as swine and alcoholic beverages in exigent situations.