AL-KAFI #1042: THE MEANING OF LAGHA (USELESS OR FOOLISH TALK) IN FRIDAY PRAYER 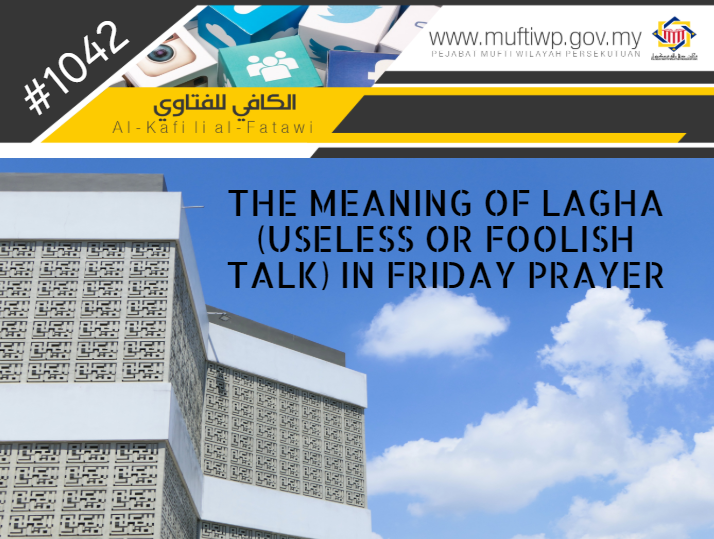 Assalamualaikum SS Mufti, I always hear people cautioning others to not utter any words during the sermon of Friday prayer for he would have considered has committed lagha. My question is, what is the meaning of lagha?

Undoubtedly, the advice that you hear is true and is supported with a hadith from Abu Hurairah RA, where the Prophet PBUH said:

"Even saying to your companion 'Listen' while the imam is giving the khutba on the day of jumua, is to speak foolishly."

If we analyse the above hadith, we find that even advising others who are talking during the sermon would result in the person advising be considered to have committed lagha (speak or talk foolishly). While when in any other circumstances, advising against a mistake when we see it is considered as preventing a bad deed.

This is known as mafhum al-muwafaqah (implied meaning) from the wording of the hadith. Which means, even if preventing a bad deed with the word: “Listen,” during the Friday sermon is considered as lagha (useless or foolish speech), then surely, any other speech or talk is considered as lagha.

The Meaning of Lagha

The following we include several meanings given by scholars of lagha in Friday sermon:

First: Lagha Means the Abrogation of the Benefit of Friday Prayer

This means someone who is talking while the khatib is giving the sermon would abrogate the benefit of Friday prayer. This is strengthened with narration from Abu Hurairah RA, where he said: “While the Prophet PBUH was giving a sermon, Abu Zar asked Ubai bin Ka’ab: “When was this Surah revealed?” However, Ubai did not respond and after the prayer is completed Ubai said to Abu Zar:

“You have gained nothing from your prayer today except the idle talk that you engaged in.”

Then Abu Zar went to the Prophet (ﷺ) and told him about that, and what Ubayy had said to him. The Messenger of Allah (ﷺ) said: ‘Ubayy spoke the truth.’”

The same is stated as for the meaning of lagha where it abrogates the benefit of Friday and is supported by the following narration. From Abdullah bin ‘Amru bin al-‘Ash RA, he said, the Prophet PBUH said:

“Three types of people attend Friday prayer; One is present in a frivolous way and that is all he gets from it; another comes with a supplication, Allah may grant or refuse his request as He wishes; another is present silently and quietly with-out stepping over a Muslim or annoying anyone, and that is an atonement for his sins till the next Friday and three days more, the reason being that Allah, the Exalted, says: "He who does a good deed will have ten times as much,"

In another hadith from Ali bin Abi Talib, he said:

“If anyone says to his companion sitting besides him to be silent (while the imam is preaching), he is guilty of idle talk. Anyone who interrupts (during the sermon) will receive nothing (no reward) on that Friday.”

Second: Lagha Means the Friday Prayer is Considered to be Just A Normal Zohor Prayer

It means that whoever talk or speak while the khatib is giving a sermon, he will lose the rewards of Friday prayer and the Friday prayer he performed will be considered as a normal zohor prayer. This is in accordance with a hadith from Abdullah bin ‘Amru RA, where he said:

“But he who indulges in idle talk and steps over the necks of people (in the mosque), that (Friday) will be for him like the noon prayer.”

Imam al-Hafiz Ibn Hajar al-Asqalani cited the opinion of Ibn Wahb who is a narrator for the above hadith, where he said: “His prayer is valid but he will not receive the benefits of Friday prayer.” Refer Fath Al-Bari, Ibn Hajar (2/414).

To conclude, both meanings of lagha in Friday prayer is similar. This means that the difference of opinions is only on khilaf lafzi which is a difference in the wording but the meaning is the same.

Lagha means that it will result in the loss of the rewards for his Friday prayer, but it is still valid and it is not necessary to be repeated.

Lastly, we should strive to avoid anything that could distract our attention from listening to the sermon of the Friday prayer. Hopefully, this explanation will help us in understanding our religion. Ameen.