AL-KAFI #1047: A WOMAN IN IDDAH GOING OUT OF HER HOUSE FOR CHARITY 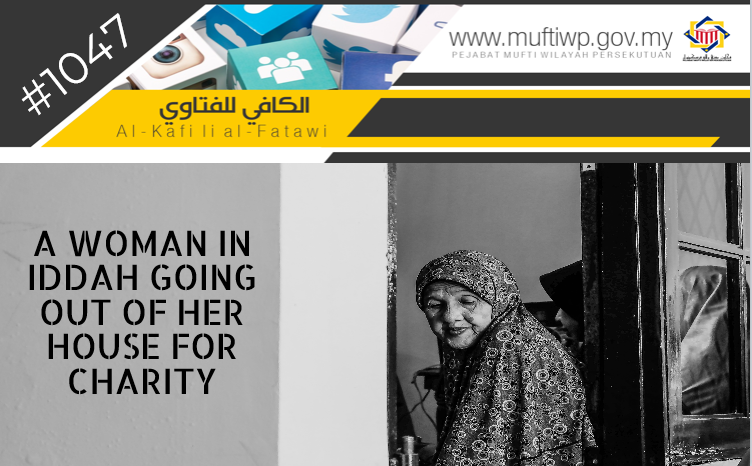 Our family has just experienced the death of my father. Now, my mother is completing her iddah in her house. The issue arises when my mother informs us of her decision to donate my late father’s equipment used for his treatment to the hospital. Is it permissible for her to go out of her house to send the equipment, when it is obligatory for her to stay in her house while completing her iddah? Hope for an explanation.

According to syarak, the obligatory term for iddah for a woman whose husband died is four months and ten days. Allah SWT state:

“And those who are taken in death among you and leave wives behind - they, [the wives, shall] wait four months and ten [days].”

Howver, it is not an issue for a widow who are completing her iddah to go out of her house to fulfil her needs. Among the facilitation that is permissible is for charity. This is in accordance with a hadith narrated by Sayyidina Jabir bin Abdullah RA:

My maternal aunt was divorced, and she intended to pluck her dates. A person scolded her for having come out (during the period of 'Idda). She came to Allah's Prophet (may peace be upon him.) and he said: “Certainly, you can pluck (dates) from your palm trees, for perhaps you may give charity or do an act of kindness.”

Imam al-Nawawi in Syarh Sahih Muslim (10/108) said: “The hadith is an evidence that rule it permissible for a woman in iddah to go out to fulfil her needs. The opinion of madhhab Malik, al-Tsauri, al-Laits, al-Syafie, Ahmad and other scholars state that it is permissible for a woman in iddah ba’in to go out during the day to fulfil her needs. They also ruled it permissible for a woman whose husband died and this is agreed by Abu Hanifah, although in talak bain cases he ruled it impermissible for the woman to go out whether it is during the day or night. This hadith is also an evidence on the encouragement to give dates to charity when it is time for their harvest, the same with giving them away as gifts. It is encouraged for the owner of the dates himself to do it and reminding the goodness that comes from it. Wallahua’lam.”

The facilitation and permissibility are bound on one condition; the woman in iddah is only permissible to go out during the day and she must return to her house where she is completing her iddah and spend the night there. This fact is stated by Imam Syamsuddin al-Ramli when discussing the words of Imam al-Nawawi: [And the condition that the woman must return home and spend the night in her house] as stated in the narration from al-Syafie and al-Baihaqi – May Allah SWT bless them both: Indeed, a lot of men are martyred during the war of Uhud. Then the women (widows) said: “O Rasullullah! Indeed, we are scared to be alone in our houses and spend the night in a house from among us.” Then, the Prophet PBUH permits them to talk in one of their houses, but when the time to sleep comes, they must return to spend the night at their respective houses.”

Hence, in answering the above question, we are inclined towards the opinion that it is permissible for your mother who has lost her husband and is completing her iddah to go out of her house to donate the treatment equipment to the hospital. This facilitation is permissible on the condition that the matter is done during the day and your mother return to her iddah home for the night.

Hopefully, Allah SWT give patience and strength to the family of the questioner and is blessed with rewards for the donation given. Amin.