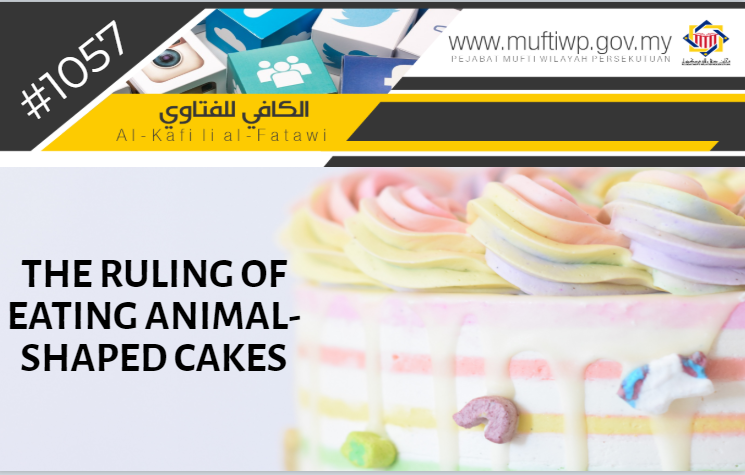 Assalamualaikum ustaz. I went to a cake shop and saw a cake shaped like a dog. Then, there are cakes shaped like a cat, swine and other animals. My child asked me to buy the animal-shaped cake, but I refuse because I’m doubtful as to its permissibility. Hope for an explanation from you. Thank you.

“They ask you, [O Muhammad], what has been made lawful for them. Say, "Lawful for you are [all] good foods,”

Syeikh al-Maraghi said the meaning of ٱلطَّيِّبَـٰتُ is any type of food that is good for oneself and the life of anyone who is eating it. It is also food that is edible and digestible for humans and at the same time provide the nutrients needed by the body. Refer: Tafsir Al-Maraghi (6/56)

Before answering the questions asked, we will first state the ruling of carving of making a figure that resembles a living thing. We have written an in-depth discussion of this issue of carving or painting living creatures in Irsyad al-Fatwa Series 213 [1]

Basically, it is prohibited to carve or paint a complete living creature. This is in accordance with several hadiths. Some of them are:

“Whoever makes a picture will be punished by Allah till he puts life in it, and he will never be able to put life in it.”

“All the painters who make pictures would be in the fire of Hell. The soul will be breathed in every picture prepared by him and it shall punish him in the Hell,”

According to the above hadiths, it is prohibited to carve figures or paint complete living creatures. The reason for its prohibition is as sad al-Zari’ah which means blocking the means, for it is feared that it could lead to the making of idols and worship.

Syeikh Zakaria al-Ansari states that it is prohibited to carve any animals, whether it is on land or clothing. The reason is the prohibition of painting any living creatures is agreed by scholars. The same goes for payment from he has carved. Refer: Asna Matalib Syarh Raudh Al-Talib (3/226)

However, if the carved object is incomplete, such as without a head or half of the head or without hands, then, it is permissible.

“The exception to the prohibition is if the animal is drawn without a head. Then, in this situation, it is permissible.” Refer: Tuhfah Al-Muhtaj Bi Syarh Al-Minhaj (11/464)

The same is applicable for painting or carvings that is not for the purpose to be worshipped, honoured, such as using it as a pillow, bed sheets and others. This is in accordance with a hadith from Abu Hurairah. He said:

"Jibril, peace be upon him, asked permission to enter upon the Prophet [SAW] and he said: 'Come in.' He said: 'How can I come in when there is a curtain in your house on which there are images? You should either cut off their heads or make it into a rug to be stepped on, for we Angels do not enter a house in which there are images.'"

Maulana Badiuzzaman Syah al-Sindi said that cutting of the heads means making the painting incomplete to abrogate the prohibition of it. (Refer: Hasyiah Al-Sindi ‘Ala Al-Nasaie, pg. 2/301)

‘Ikrimah said: “The companions of the Prophet PBUH said: Painting or carving on pillow or bed sheets or mat is a form of degradation towards the painting.” (Refer: Musannaf Ibni Abi Syaibah, 5/207)

Coming back to the above question, in our opinion, it is permissible to buy an animal-shaped cake or animal decorated topping, for the purpose of buying it is to be eaten. It is also permissible to be eaten, following the Islamic legal maxim:

“The original ruling of something is its permissibility.”

This means that as long as the ingredients of the cake are permissible, then, it is permissible to be eaten. Another Islamic legal maxim state:

“Ibrah of something is based on the reality of it, not what it is known as.”

To conclude, it is permissible to buy and eat the cake as long as the ingredients are permissible. We advise to avoid buying cakes shaped or painted with the image of a dog or swine. The reason is, it is to avoid being a fitnah for himself and making others think badly of him. This is a form of a lesson for children so that they will not think that dog and swine is permissible to be eaten. This is in line with the Islamic legal maxim:

“Whoever purposely do something that will lead to fitnah, then he will be accused of it (performing the act).”

May Allah SWT bless us with understanding in His religion. Wallahua’lam.