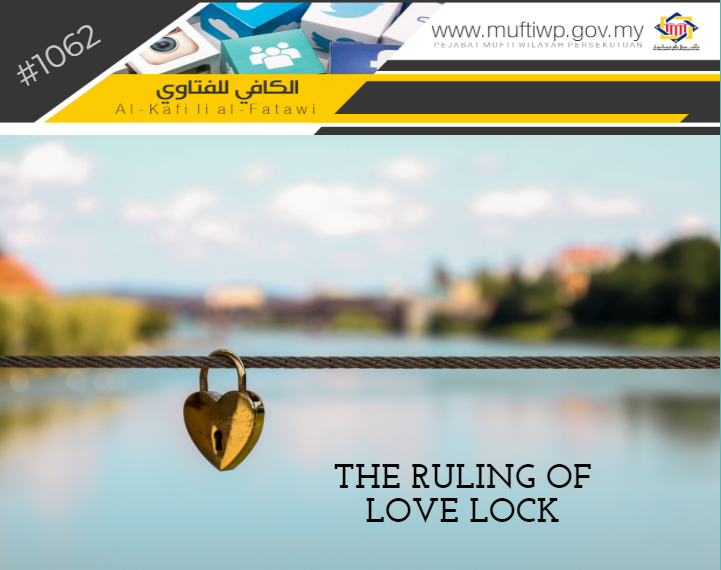 I want to ask, what is the ruling of locking love lock in certain places hoping to find a partner or have a lasting relationship?

Love lock or also known as love padlock is a padlock which sweethearts or lovers lock to a bridge, fence, gate, monument, or similar public fixture to symbolize their love. Typically, the sweethearts' names are inscribed on the padlock to symbolize unbreakable love. See the Wikipedia article titled love lock [1].

In answering this issue, we would like to ask the Muslim ummah to contemplate on the verse we always recite in our five daily prayers. Other than just reciting it, we should also understand its meaning:

“It is You we worship and You we ask for help.”

Imam Ibn Kathir explains that the phrase “iyyaka” is placed at the beginning of the verse and repeated to emphasize that only to Allah SWT that we put our matters in and we will not place our matters in other than Allah SWT ever. See Tafsir al-Quran al-‘Azim (1/28).

Thus, it is clear that in our daily lives, we are taught to always ask from Allah SWT and put our trust in Allah SWT in everything. Furthermore, there are numerous evidences in the Quran that mentioned the blessings of Allah SWT to His servants who ask from Him:

[Remember] when you asked help of your Lord, and He answered you, "Indeed, I will reinforce you with a thousand from the angels, following one another."

Imam al-Qurtubi commented on the above verse stating that the above verse is revealed after the Prophet PBUH supplicate to Allah SWT to help the Muslim soldiers during the war of Badar. The Prophet PBUH was worried and anxious after witnessing the disbelievers’ soldier of 1000 people while there are only 315 of Muslim soldiers. After he finished his supplication, this verse is revealed to him. See al-Jami’ Li Ahkam al-Quran (7/333).

“And your Lord says, "Call upon Me; I will respond to you." Indeed, those who disdain My worship will enter Hell [rendered] contemptible.”

It is clear from the above verses that Allah SWT is the All Sufficient and All Giving with His Blessings. There is no one more worthy to be asked for sustenance or asking for protection from Allah SWT. This is as taught to us by the Prophet PBUH in a hadith narrated by Ibn ‘Abbas RA:

“When you ask (for anything), ask it from Allah, and if you seek help, seek help from Allah.”

Furthermore, in commenting on this issue, another factor that should be considered is to not be among those who commit superstitious practices.

Indeed, Allah SWT is the All-Mighty in deciding everything. No one and nothing is able to attain happiness or avoid sadness without the will of Allah SWT. This is clear through His words:

“And if Allah should touch you with adversity, there is no remover of it except Him; and if He intends for you good, then there is no repeller of His bounty. He causes it to reach whom He wills of His servants. And He is the Forgiving, the Merciful.”

All Muslims should also avoid the practice of superstitions, such as saying that by locking a padlock on gates or certain places it could lead to everlasting love. This is clearly prohibited in a hadith of the Prophet PBUH from Abdullah bin Mas’ud RA, where the Prophet PBUH said:

The word tatayyur or tiyarah originally comes from the word al-tayr which means bird. The Arabs before Islam had a belief where they would release birds before they begin their journey. If the birds fly to the right, then it is called sa’ih and they would be happy for the journey is considered as safe. However, if the birds fly to the left or barih, then they would be sad and postpone their journey for it is considered as bad luck or bad omen for them. (See Miftah Dar al-Sa’adah, pg. 584-585)

The same is applicable when someone put their hopes and trust in something where in truth, it has no power or authority to give any guarantees of happiness.

According to the above discussion and statements, in our opinion love lock when placed somewhere with the hopes of finding a partner in life or have an everlasting love by locking a padlock in certain places is prohibited. The reason is, in our opinion it is conceptually the same with the practice of al-Tiyarah, which is putting your trust in something that could not bring any benefit. Moreover, it is clearly stated in Quranic and prophetic evidences that it is only permissible to ask anything only from Allah SWT.

May Allah SWT give us guidance in understanding and practicing Islam in our lives. Amin.