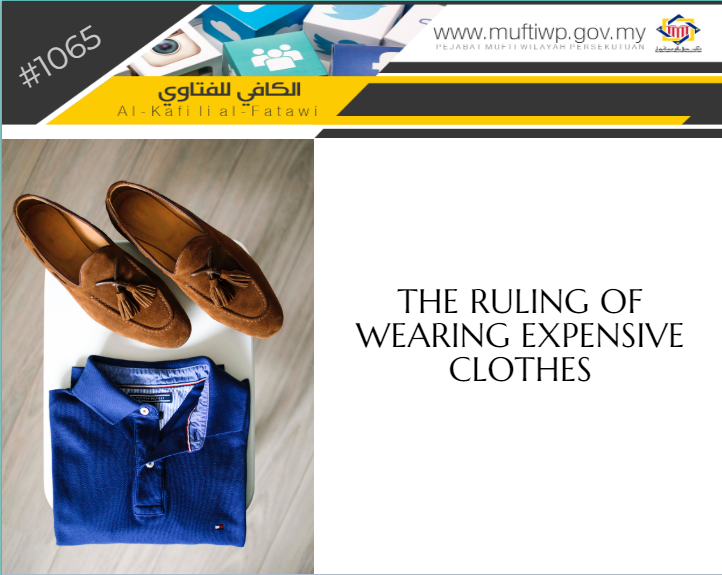 Assalamualaikum SS Dato’ Seri Mufti. I want to know what is the ruling of wearing expensive clothes? Thank you.

We will start with the statement of Dr Yusuf al-Qaradhawi who said: If the Arab society was once uncivilized and neglect their personal hygiene, through guidance and teachings of the Prophet PBUH, they are changed into a nation who loves to adorn themselves in moderation and are concern about their personal hygiene. (See al-Halal wa al-Haram fi al-Islam, pg. 144)

Regarding the above question, it is permissible to wear expensive clothing if it is within their means. Hammad bin Abi Hanifah once said that Abu Hanifah likes to wear expensive and beautiful clothing to showcase the blessings of Allah SWT on him and honouring the knowledge he has. (See Istilah-istilah Fiqah dan Usul Empat Mazhab, pg. 17)

“When Allah gives you property, let the mark of Allah's favour and honour to you be seen.”

As for being untidy and unkempt, it is bad manners and unacceptable in Islam. A person should tidy himself and take care of his personal hygiene, maintaining his character.

"Isn't this better than that one of you should come with his head dishevelled, as if he were a shaytan?"

However, in our opinion it is permissible to wear expensive clothing when one understands and follows the following guidelines:

“Do not wear clothes of silk or Dibaj,”

“And do not spend wastefully. Indeed, the wasteful are brothers of the devils, and ever has Satan been to his Lord ungrateful.”

“Whoever wears a garment of pride and vanity in this world, Allah will clothe him in a garment of humiliation on the Day of Resurrection, then set it ablaze.”

In our opinion, fiqh aulawiyat should also be considered that if it is in times when there are a lot of people who are in need, it is prioritized to avoid wearing such clothing.

May Allah SWT bless us with knowledge and understanding. Amin.