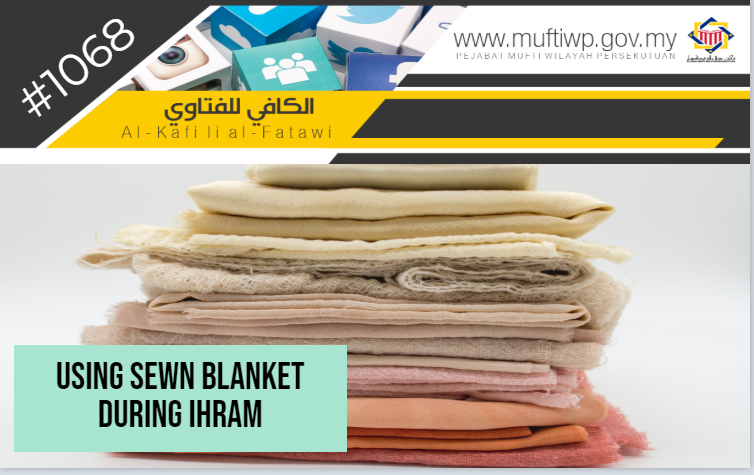 I’m on my way from Kuala Lumpur to Jeddah where I will set my intention for ihram at Qarnul Mazazil. In flight, I’m given a sewn blanket. Can I use it?

Regarding the above question, it is permissible to use the blanket before one reaches Qarnul Manazil. However, as soon as one sets the intention of ihram after reaching Qarnul Manazil, then the blanket can only be used to cover one’s body up to one’s necks without covering the face for women and head for men. The reason is, these are the restrictions of ihram.

“A Muhrim should not wear a shirt, a turban, trousers, hooded cloaks, a garment touched with (perfumes) of saffron or wars,”

"Wash him with water and Sidr and shroud him in two pieces of cloth, and neither perfume him, nor cover his head, for he will be resurrected on the Day of Resurrection saying, 'Labbaik,' (i.e. like a pilgrim)."

“A woman in ihram should wear neither a veil nor gloves.”

Hence, it is clear that when one is in ihram, then the blanket is permissible to be used to cover oneself up to one’s neck only without covering one’s face for woman and head for man. The reason is, it is included in the restrictions in ihram. However, if he has not reached Qarnul Manazil such as he is still at KLIA, then it is permissible.

May Allah SWT bless us with understanding and knowledge for us in performing His commandments. Amin.