AL-KAFI #1102: IS IT TRUE THAT THERE ARE NO RECITATIONS OF ‘WA’AFINI’ AND ‘WA’FU’ANNI’ FOR SITTING IN BETWEEN PROSTRATIONS IN PRAYER? 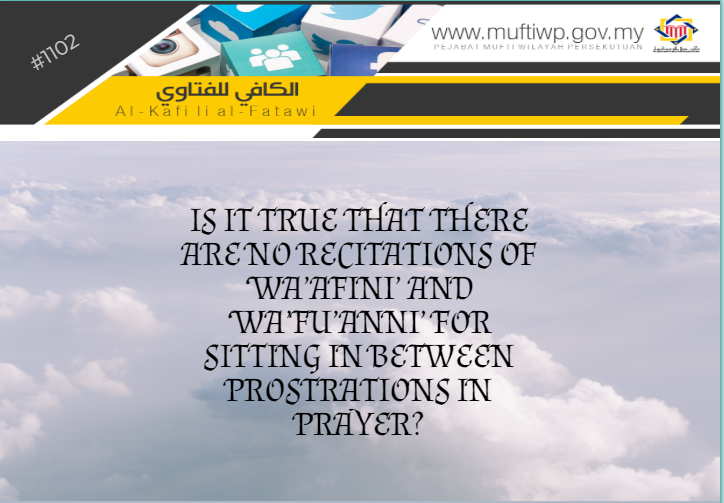 I once saw a poster that is spread in the internet. It states there that there are no recitations of wa’afini and wa’fu’anni for sitting in between prostration in prayer. This is the first time I heard about it. Hope for an explanation.

Before we discuss further on the poster’s content, it is best for us to first explain the ruling of recitation for the position of sitting in between prostrations in prayer. Imam Ibn Hajar al-Haitami (974h) said upon commenting on the saying of Imam al-Nawawi (676h):

“[It is Sunnah to recite: O my Lord, forgive my sins, bless me, help me, elevate my ranks, provide me with sustenance, bless me with guidance, protect me] due to ittiba’ (following the Sunnah of the Prophet PBUH) in every word uttered, added by (in the book of) al-Ihya’: forgive me.”

Hadiths mentioning the recitations for sitting in between prostrations in prayer varies. The scholars arranged them to gain better rewards and as a precautionary step. This fact is explained by Imam al-Nawawi through his saying: “Pertaining the hadith of Ibn ‘Abbas, it is recorded by Abu Dawud, al-Tirmidhi and others with a good sanad, and al-Hakim also narrated on this in al-Mustadrak saying: “Its isnad is sahih.”, and the words narrated by Abu Dawud is,”

While the words narrated by al-Tirmidhi is very similar to this, but there is an addition of “help me and elevate my ranks”. Meanwhile, in the narration of Ibn Majah, phrase وَارْفَعْنِي replaces وَاهْدِنِي, while in al-Baihaqi’s narration:

Hence, the most cautious and chosen opinion is by gathering all narrations and stating all of the seven utterances which are:

…Imam al-Nawawi said: “The writer of al-Tatimmah (Imam Abu Sa’d al-Mutawalli) this is not the only du’a specified, but rather any du’a is sunnah to be recited, however, it is prioritized to recite what is stated in the hadith.”

Hence, it is clear to us that the addition of wa’afani is an authentic sunnah from the Prophet PBUH and not an invention that is rejected.

What about the addition of wa’fu’anni stated in the poster?

As stated above, it is clear the addition of wa’fu’aanni is stated by Imam al-Ghazali in Ihya’ Ulum al-Din (1/155). Furthermore, the addition is not a rejected addition sitting in between prostrations is a position in prayer to supplicate with any du’a as stated by Imam al-Mutawalli. Moreover, the addition does not precede the sunnah for it is said to be less prioritized for it is recited after established (ma’thur) du’a when one is sitiing in between prostrations in prayer. The meaning of wa’fu’anni do not have a bad meaning, but it is us asking Allah to forgive our mistakes.

The scholars have differing opinions in stating which phrase is more ablagh (more rhetoric or has a deeper meaning). Some of them state that the phrase “العفو” is more ablagh compared to “المغفرة”. Among them is Imam al-Ghazali in his book, where he states the difference between these two phrases in which “العغو” means pleading to Allah SWT to remove the sins and be free of all sins. It is close to “الغفور”, but this phrase is more ablagh than “الغفور” because “الغفور” is pleading to Allah SWT to cover the sins (not remove them). Refer al-Maqsad al-Asna (pg.140).

Besides, Syeikh Muhammad Munir al-Dimasyhqi said in his book that “العفو” is Allah’s right where all traces of sins are deleted from the books of deeds and they will not be judged on the Day of Judgement anymore. Also, the sins are removed from his heart, so that he will not be ashamed of it when it is being brought up and the sins will also be replaced with goodness. For that, “العفو” is more ablagh than “المغفرة” because “المغفرة” means covering (the sins). While “العفو” means removing or eliminating them. Refer al-Nafahat al-Salafiyyah (pg. 87)

The second opinion states the contrary in which “المغفرة” is more ablagh than “العفو” because “المغفرة” means covering and abrogating the punishment as well as acquiring rewards. While “العفو” does not cover (the sins committed) and not necessarily means promised rewards. Among the scholars who are inclined towards this opinion is Imam Ibn Rejab al-Hanbali. He stated that “المغفرة” will not be accomplished except when punishment is abrogated or waived. This is because “المغفرة” is a shield from the harms of the sins as a whole and forgiveness is normally gained after punishments. For that, that is why all worldly tribulations are the remover of our sins and named as punishments. While “العفو” may take place along with the punishment or without it. Refer Jami’ al-‘Ulum wa al-Hikam (2/526)

Through hadith perspective, the phrase wa’fu’anni as du’a is ma’thur which originates from hadiths of the Prophet PBUH and can be practised. It is narrated from Ibn Abi ‘Aufa RA that a man came to meet the Prophet PBUH to teach him the recitations of prayer, but he cannot recite the Quran properly, then the Prophet PBUH taught him the following du’a:

Then, the Prophet PBUH said: “Henceforth, both his hands are made full of goodness.” Narrated by al-Baihaqi in al-Sunan al-Kubra (2/532)

Based on the above explanation and facts, we are inclined to the opinion that it is permissible to recite wa’afini and wa’fu’anni for sitting in between prostrations in prayer for it the first recitation is from the sunnah of the Prophet PBUH, and the general permissibility to recite du’a while sitting in between prostrations in prayer with any du’a as long as one does not abandon the stated sunnah. If not, then its rewards will decrease. May this explanation give us the strength to be consistent in gaining knowledge as well as practising them. Wallahua’lam.