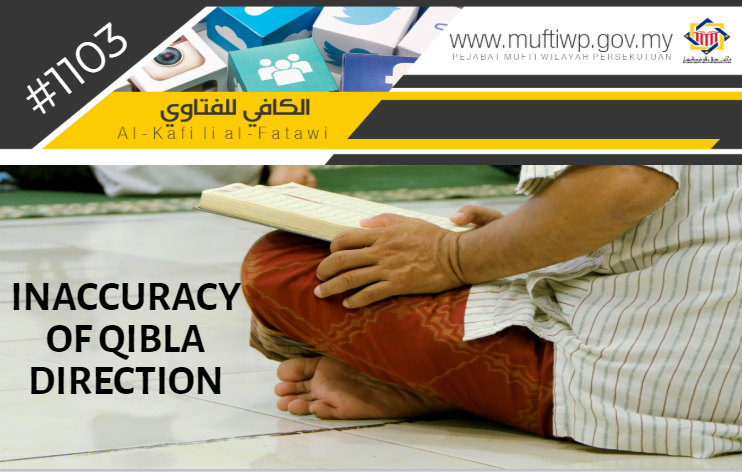 Using google qibla finder, I tried finding the qibla at a surau in my neighbourhood. However, I found out that the qibla is inaccurate, if it is supposed to be at twelve o’clock, then using the app it is said to be at 12.03. When I inform it to the mosque’s committee, they said that since it’s only a little inaccuracy, then it’s fine. Is it permissible for me to continue praying in congregation there or will it invalidate my prayer since now I know that the qibla is inaccurate?

First, we would like to state that facing the qibla is one of the valid conditions of prayer. We cite the explanation of the author of the book al-Fiqh al-Manhaji:

“What is meant by qibla is the Kaaba, while facing the qibla means that we are facing the direction of the Kaaba. The evidence of it as one of the valid conditions of prayer is stated in the Quran:

The same is stated in a hadith, where the Prophet PBUH taught the people how to pray:

“When you get up to pray, perform the ablution completely, and then turn towards the Qibla and recite takbir (Allah o Akbar =Allah is the Most Great).”

The meaning of Masjid al-Haram in the above verse and qibla in the above hadith is Kaaba. All Muslims are to face the Kaaba; whether it is for those who are near the Kaaba where they can see it, or for people far away where they cannot see it. For those near the Kaaba, it is obligatory for them to face the Kaaba and be certain that they are facing it, while for those who are far and cannot see it, then it is obligatory for them to follow certain guides if there are no absolute and accurate guidelines. Refer: al-Fiqh al-Manhaji (1/127-128)

For those who are far away from the Kaaba or they are obstructed from seeing straight to the Kaaba, it is fine if they pray with the position is a little to the right or to the left from the Kaaba itself, for it is due to the great distance, on the condition that the direction is not away from the qibla. Refer: al-Mu`tamad fi al-Fiqh al-Syafie (1/217).

According to the above discussion and facts, we are inclined to state that if the qibla is a little inaccurate, whether it is a little bit to the right or left, it does not affect the validity of prayer. However, in our opinion, the best way to resolve this issue is to employ the services offered by the astronomy unit (unit falak) of the Mufti office in your respective state. The reason is, the usage of compass may result in minor differences compared to using modern equipment used specifically for determining qibla, which will be more accurate. Surely, the confirmation and certification from the astronomy unit will resolve the confusion and controversy among the congregation which in turn will ease their worry and they can calmly perform prayer with certainty.

We pray that this issue is resolved properly: