AL-KAFI #1105: THE RULING OF LISTENING TO THE FRIDAY SERMON AT HOME 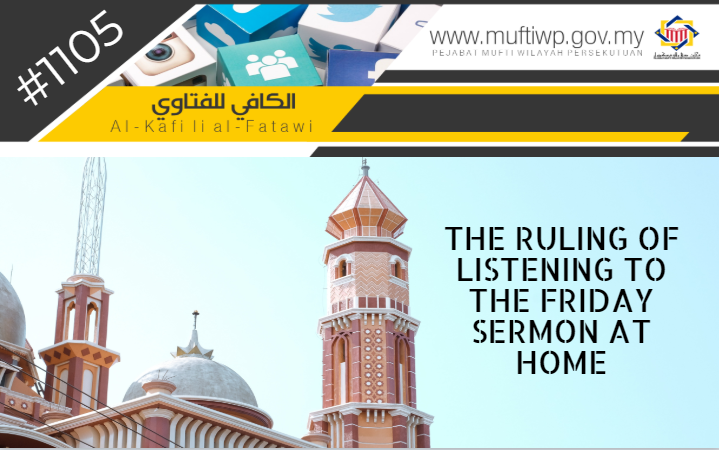 Friday sermon is one of the valid conditions of Friday prayer and it would certainly be invalid without it. According to Imam Ibn Qudamah, this is the agreed opinion of scholars with the exception of al-Hasan al-Basri. (Refer Al-Mughni, 2/74)

As for the question asked, we will answer it with the statement of Allah SWT:

According to Syeikh al-Sa’di, the above verse teaches us that Allah SWT commanded His believing servants to quickly proceed to the mosque for Friday prayer as soon as the adhan is called and to prioritize the Friday over all other matters. (Refer Tafsir al-Sa’di, 1/863)

While Imam al-Kasani gave two opinions regarding the meaning of phrase zikrullah (remembrance of Allah) in the above verse, which are; the Friday prayer or the sermon for Friday prayer and both opinions are true. (Refer Bada’ie al-Sana’ie, 1/247 and 262)

Whereas according to Imam Syaukani, through the verse, Allah SWT commanded us to quickly proceed towards zikrullah and sermon is a type of zikrullah. (Refer Al-Sail al-Jarrar, pg. 182)

“Whoever performs Ghusl on Friday, and bathes completely, and goes early, arriving early, gets close and listens and is silent, there will be for him in every step he takes the reward of a year of fasting and standing (in prayer).”

It is clear from both the verse of the Quran and hadith that it is a commandment to quickly proceed to the mosque after the adhan is called or even arriving early before the adhan. This is also the fatwa issued by Permanent Committee for Scholarly Research and Ifta’ and Syeikh Salih ibn ‘Uthaimin. (Refer Fatawa al-Lajnah al-Da’imah3/324 and Fatawa Nur ‘ala al-Darb 15/188)

To conclude, in our opinion, it is an obligation of every Muslim to quickly proceed to the mosque for Friday prayer after the adhan is called and it is sunnah to arrive early to the mosque before the adhan except for those who are fulfilling their other needs or are sick.

This is in accordance with the above stated statement of Allah SWT and also considering the great rewards for those who perform iktikaf in the mosque and increasing their worship on a Friday.