AL-KAFI #1106: THE RULING OF BLOWING HOT FOOD AND DRINKS 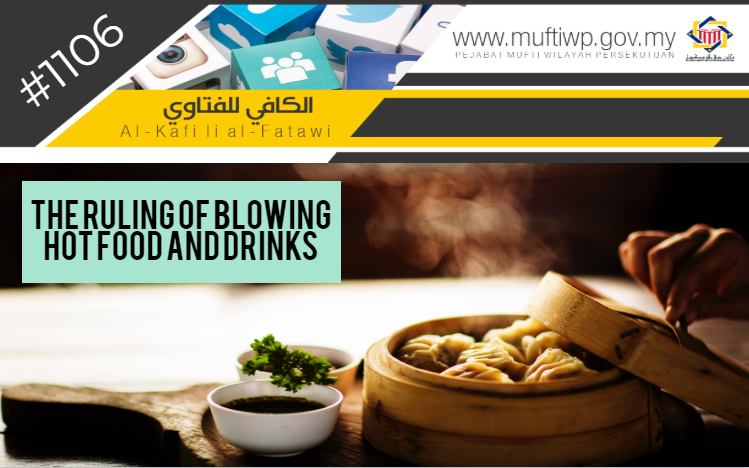 What is the ruling of blowing hot food and drinks? What about breathing while drinking?

"The Messenger of Allah (ﷺ) prohibited breathing in the vessel, or blowing into it."

Scholars have differing opinions when commenting on the above hadith. Here, we include the opinions of scholars regarding this issue:

Furthermore, there is another hadith from Anas bin Malik RA:

Thus, it can be understood that while drinking, the Prophet PBUH avoid breathing inside the glass for the benefits stated in the above hadith.

Explanation on the Ruling

In regards to the ruling, breathing inside the food or drink container is makruh (undesirable) and not prohibited as stated by Imam al-Syarwani, Imam Zakariyya al-Ansari and Imam Ibn Muflih al-Hanbali. (Refer: Hasyiah al-Syarqawi wa al’-Ubbadi7/438, Asna al-Mathalib 3/228 and Al-Adab al-Syar’iyyah 3/296)

Imam al-Mardawi al-Hanbali cited the opinion of Imam al-Amidi who do not rule it as makruh (undesirable) to blow on hot food and this is the accurate opinion according to al-Mardawi, if there is a necessity for the food to be eaten quickly. (Refer: Al-Insaf fi Ma’rifah al-Rajih min al-Khilaf 8/242)

In short, after analysing the above commentaries and explanation of scholars, in our opinion, the original ruling of blowing or breathing in food or drink containers is permissible. The reason is, the restriction is only applicable on the following conditions: