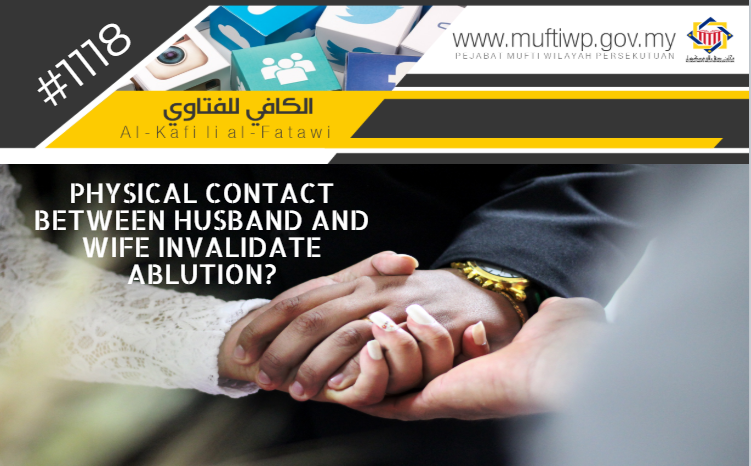 Assalamualaikum Dato’. If a husband touches his wife, does this invalidate his ablution? Such as when he shakes his wife’s hand when he is going to work and others, for there are some who claimed that it does not invalidate ablution.

Waalaikumsalam. Alhamdulillah, praise and thanks to Allah for the countless blessings He has blessed us all with. Blessings and salutations to the Prophet Muhammad PBUH, his wives, his family, companions and all those that follow his teachings to the day of judgement.

Wuduk (ablution) is a word taken from the Arabic word (الوضاءة) which means cleanliness and purity. From syarak, wuduk is the usage of water to wash certain specific parts of the body. It is named as wuduk for its attribute of cleaning and purifying. It has its own conditions, requisites and sunnah for it to be completed. (Refer: Al-Mu’tamad Fi Al-Fiqh Al-Syafie: 1/69)

Allah SWT commanded in the Quran:

To conclude this issue, in Al-Taqrirat Al-Sadidah, the matters that invalidate ablution is stated as the following:

In terms of physical touch between man and woman (ajnabi), this has been stated by Allah SWT in the Quran:

“And if you are in a state of janabah, then purify yourselves. But if you are ill or on a journey or one of you comes from the place of relieving himself or you have contacted women and do not find water, then seek clean earth and wipe over your faces and hands with it.”

Imam al-Nawawi stated in his book:

Syeikh Muhammad Zuhaili in his book stated: “What is meant by ajnabi woman is a woman who is permissible for him to marry. And mahram means a woman who he is prohibited from marrying. Skin contact with a young female child does not invalidate ablution (if it is not with desire), the same as touching the hair, nail or teeth. Skin contact with an elderly invalidate ablution even if without desire.” (Refer: Al-Mu’tamad Fi Fiqh Al-Syafie: 1/87)

The final opinion in madhab Syafie states that skin contact between husband and wife invalidates ablution; whether it is with or without desire for both are considered as ajnabi. (Refer: Al-Taqrirat Al-Sadidah:102)

According to the above question of skin contact between husband and wife, it invalidates the ablution of both of them. However, if there is a liner, then it does not invalidate the ablution. And this is the final opinion in madhab Syafie that is practised in our country.