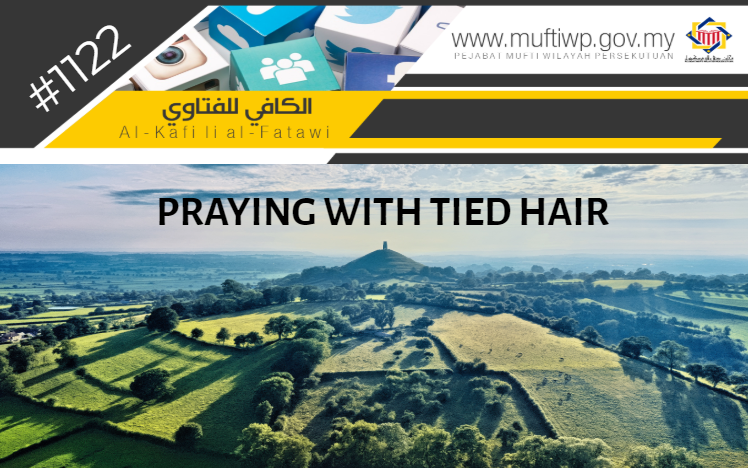 Assalamualaikum SS Dato’ Seri Mufti. What is the ruling of a congregation who ties his hair when he is praying?

In a hadith from Ibn Abbas R.Anhuma, he said:

Abdullah b. Abbas reported that he saw 'Abdullah b. al-Harith observing the prayer and (his hair) was plaited behind his head. He ('Abdullah b. 'Abbas) stood up and unfolded them. While going back (from the prayer) he met Ibn 'Abbas and said to him: “Why is it that you touched my head?” He (Ibn 'Abbas) replied: “(The man who observes prayer with plaited hair) is like one who prays with his hands tied behind.”

In Nail al-Authar, it is stated: “This prohibition (of tying one’s hair while praying) is specific for men and not for women. The reason is, their hair (women’s) is aurah and it is obligatory to be covered during prayer. If they untie their hair, then it will be hard to be covered and it will invalidate her prayer. Furthermore, it will also be troublesome for women to always untie their hair every time they want to pray.”

“The Prophet PBUH himself gave facilitation for women to not untie their hair for their obligatory bath, even if it is necessary to wash their hair completely for the bath.” (See: Nail al-Authar, 2/440)

Hence, it is permissible for women to tie their hair in a bun. In the issue of a man tying his hair, what should be considered is the length of his hair. Does it reach the degree of resembling (tasyabbuh) a woman, if so, then it should be avoided. The length of his hair must not exceed the limit of what is normal for a man that it resembles a woman.

Their prayer is valid, but it is makruh tanzih for men. May Allah SWT give us understanding in practising His religion. Amin.