AL-KAFI #1129: LOVING AND DOING GOOD TO THE ELDERLY 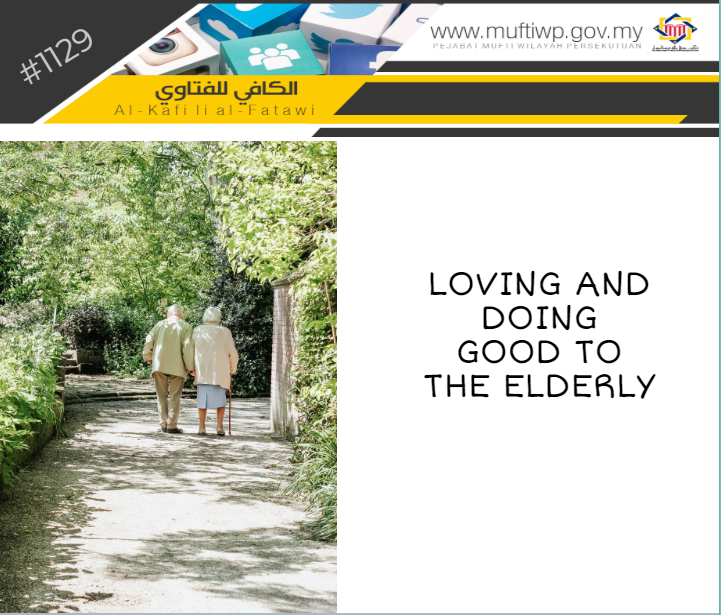 Assalamualaikum, what is the best way for us to do good to the elderly?

Waalaikumussalam. Alhamdulillah, praise and thanks to Allah for the many countless blessings He has blessed us all with. Blessings and salutations to the Prophet Muhammad PBUH, his wives, his family, companions and all those that follow his teachings to the day of judgement.

Respecting and Loving Them

Islam taught us to always do good to someone older than we are. This is stated in a hadith narrated by Anas bin Malik RA, where an elderly came to meet the Prophet PBUH, but the crowd is hesitant in giving way to him to walk. The Prophet PBUH said:

“He is not one of us who does not have mercy on our young and does not respect our elders.”

Al-Munawi commented on the above hadith stating: “Indeed, both actions are an obligation placed rightfully according to their rights. Where the adults love the young at the same time the youths respect and honour their elders.” (Refer Faid Al-Qadir Syarah Al-Jamie’ Al-Soghir:5/388)

Ibnu Abi Dunya wrote the story of a tabi’in where all of them respect each other. This is narrated from Talhah bin Musharrif, while he was walking with Malik bin Mighwal and they arrive at a narrow road and he walks preceding me, then he said:

“If I know that you are a day older than me, I wouldn’t have preceded you.” (Refer Makarimal Al-Akhlak Li Ibnu Abi Dunya: 1/93)

Help and Assist Them

Helping in everything that is good is a commandment in Islam. Allah SWT state in the Quran:

The Prophet PBUH commanded his ummah to help and assist others so that it will be easy for him in the hereafter. This is stated in a hadith from Abu Hurairah RA, where the Prophet PBUH said:

Imam Ibnu Daqiq al-A’id commented on the above hadith in his book, “There are numerous wisdoms and lessons from this hadith regarding the advantages of fulfilling the needs of someone. This includes helping in the matters of knowledge, property, advise and others.” (Refer Syarah Al-Arbain Al-Nawawi Li Ibnu Daqiq Al-A’id: 1/119)

To conclude, there are several ways for us to do good to the elderly, among them are:

“Jibril AS commanded me to prioritize the elderly.”

“There is no believing servant who supplicates for his brother behind his back (in his absence) that the Angels do not say: The same be for you too.”

Do good and be polite to the elderly is a commandment of our religion and we should always be the example in our society. In the Quran, Allah SWT acknowledges that the Prophet PBUH is the best of example to be followed:

“There has certainly been for you in the Messenger of Allah an excellent pattern for anyone,”