AL-KAFI #1131: IS IT PERMISSIBLE TO PERFORM ONLY ONE RAKAAT OF WITIR PRAYER? 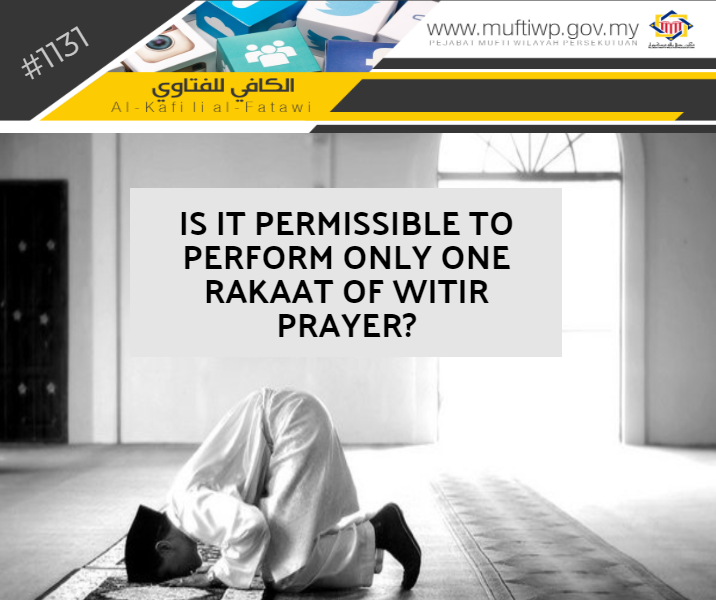 Assalamualaikum. After the Isya’ prayer I would see people perform one rakaat witir prayer. Is this permissible?

Answering the above question, we will cite the statement made by the author of the book al-Fiqh al-Manhaji (1/527-529): The minimum for witir is one rakaat, however, it is makruh (undesirable) to be performed for only one rakaat. The minimum for a complete witir is three rakaat, which is by performing the first two rakaat followed by one rakaat. While the perfect witir prayer is eleven rakaat performed in twos and ends it with one rakaat.

This is according to a hadith from Ibn Umar RA, where the Prophet PBUH said:

“Witr is a rak'ah at the end of the night prayer.”

In the next hadith, from Aisyah R.Anha, she said:

“Between the time when the Messenger of Allah (ﷺ) finished the 'Isha' prayer which is called 'Atama by the people, he used to pray eleven rak'ahs, uttering the salutation at the end of every two rak'ahs, and observing the Witr with a single one. And when the Mu'adhdhin had finished the call (for the) dawn prayer and he saw the dawn clearly and the Mu'adhdhin had come to him, he stood up and prayed two short rak'ahs. Then he lay down on his right side till the Mu'adhdhin came to him for lqama. (This hadith has been narrated with the same chain of transmitters by Ibn Shihab, but in it no mention has been made of Iqama).”

From Abu Ayyub RA, he said, the Messenger of Allah PBUH said:

Imam al-Baghawi in Syarh al-Sunnah said: Scholars have differing opinions as to the number of rakaat. According to the opinion of Imam al-Thauri, the number of rakaat for witir can be five, three or one but it is encouraged to perform three rakaat for witir. This is also the opinion of Ibn al-Mubarak and ahl al-Kufah and some of the Companions such as Abdulllah bin Mas’ud.

Some scholars from among the Companions are of the opinion that it is permissible to perform witir of only one rakaat. Among them are Uthman bin Affan, Sa'ad bin Abi Waqqas, Zaid bin Thabit, Abu Musa al-Asy’ari, Abdullah bin Umar, Abdullah bin Abbas, Abdullah bin Zubair, Mu'awiyah, 'Aisyah, Imam Malik, Imam Syafi'e and others. (See Syarh al-Sunnah, 4/82)

May Allah SWT grant us the strength to always obey Him and enable us to perform the Witir prayer every night for the rest of our lives. Amin.