AL-KAFI #1138: THE RULING OF PRAYING WHILE LEANING AGAINST SOMETHING 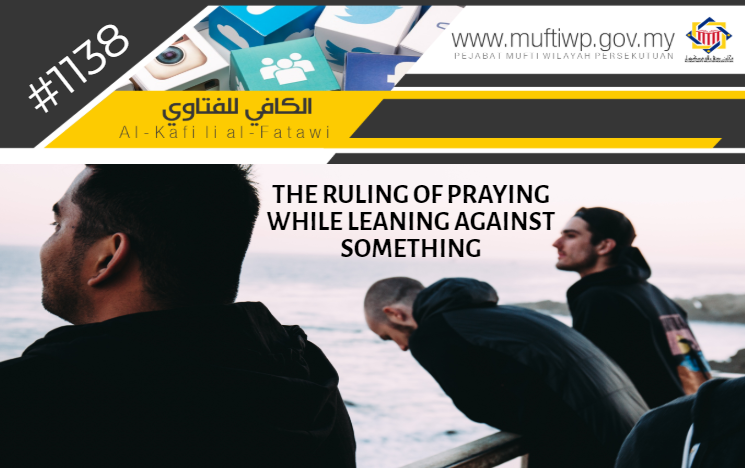 What is the ruling of praying while leaning against a pillar or wall? Is the prayer valid?

Fiqh scholars agreed on the permissibility of praying while leaning against something if there is a necessity, where he is unable to pray unless by doing so. (Refer: Al-Mausu’ah al-Fiqhiyyah al-Kuwaitiyyah 4/105 and Al-Majmu’ Syarh al-Muhazzab 3/259)

However, they have differing opinions regarding the ruling of praying while leaning against something when it is not a necessity. According to Imam al-Nawawi, one of the conditions of prayer is to stand straight in prayer. However, a question arises, whether one has to stand on his own or with some help. The accurate opinion state that one should stand straight on his own without any help. For example, if someone leans against a wall or other people, where when the object leaned against is absent that the person praying will fall, then the prayer is valid, but it is makruh (detestable). The second opinion states that it is one of the obligatory conditions of prayer to stand straight by himself, where the prayer is considered invalid if he leaned against anything while he is able to stand on his own. While, the third opinion states that it is permissible to lean against something even if he is able to stand straight on his own. (Refer: Raudhah At-Thalibin 1/232-233, I’anah al-Thalibin 1/136, Asna al-Matolib fi Syarh Raudh al-Tolib 1/145 and Kifayah al-Akhyar 1/102)

To conclude, we are inclined towards the opinion of madhab Syafi’e which states that prayer whilst leaning against something is valid, even if he would fall if the object that he leans on is moved.

However, in our opinion, it is best if someone avoid leaning against anything during prayer if he is able to stand straight on his own to avoid the matters which are makruh (detestable) in prayer, considering the opinion of majority of scholars who ruled it invalid.

Allah SWT’s commandment should be fulfilled the best way we could, especially for the commandment of prayer which is the pillar of Islam. Allah SWT state:

“And stand before Allah, devoutly obedient.”

This is a khilaf issue (where scholars have differing opinions on it) and among the manners of worship is to avoid it as we are able to. This is stated in an Islamic legal maxim:

“Avoiding the khilaf is sunnah and encouraged.”