AL-KAFI #1143: THE WISDOM BEHIND THE PROHIBITION OF SWINE 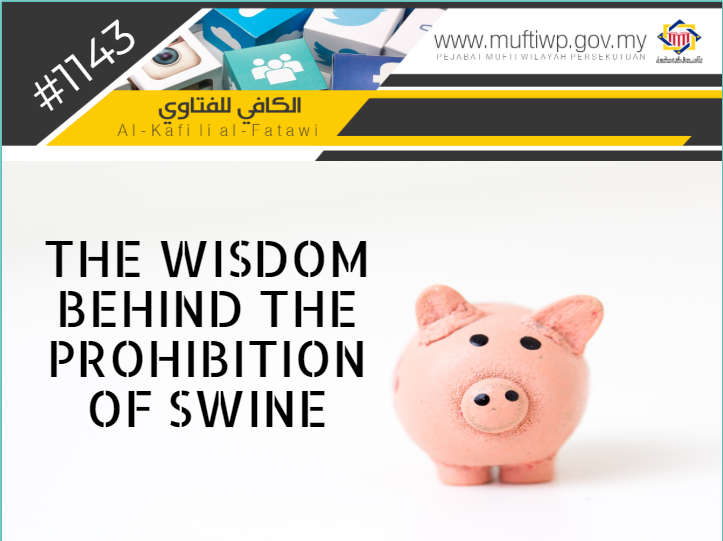 Assalamualaikum SS Dato’ Seri Mufti. Why is it that some animals such as swine are prohibited to be eaten in Islam?

Basically, swine have been clearly prohibited in Islam in the Quran, al-Sunnah and ijma’ (scholarly consensus) of scholars. (See al-Ijma’ by Ibn al-Munzir, pg. 177)

Among the verses of the Quran that states the prohibition of it is a statement of Allah SWT:

“He has only forbidden to you dead animals, blood, the flesh of swine,”

Ibnu Kathir said: “It is also prohibited to eat the flesh of swine, whether it is slaughtered or die due to unnatural causes. The fat of swine is included in the prohibition to be eaten the same as its flesh for the statement of the prohibition is general (aghlabiyyah) or the flesh includes the meaning of its fat or that the ruling of the fat of swine is analogically deduced (qiyas) to be the same as its flesh.” (See Tafsir al-Qur’an al-‘Azim, 2/36)

Ibn al-‘Arabi said: “Scholars have agreed that the totality of the meat of swine is prohibited, including all parts of its body. In the verse, it specifically states ‘flesh’ of swine, for swine is a type of slaughtered animal where its meat is taken. … And the fat of swine is included in the prohibition of the flesh of swine.” (See Ahkam al-Qur’an, 1/94)

Answering the above question, swine is prohibited because it brings harm in the chemical, microbial and attitude (psychological) aspects; it is claimed that it could decrease the feelings of jealousy which could lead to dayus. (See Tafsir al-Manar, 2/98)

Dr Yusuf al-Qaradhawi in his book al-Halal wa al-Haram fi al-Islam states the following when commenting on the prohibition of swine: The third thing that is prohibited by Allah SWT is the flesh of swine. The reason is, eating swine is bad for one’s health and it is considered as dirty and disgusting. Swine likes to eat dirty, disgusting and unclean things.

Using modern medical technology, eating swine has been proven to be harmful across the globe, especially for hot climate countries. There are scientific researches which reported dangerous and harmful pinworm or threadworm infection (parasitic worm infection which occurs only in swine), which destroys the body.

In the near future, there may be more evidences proving the harms of swine and reveal more wisdom of why it is prohibited. This is in line with the statement of Allah SWT (وَيُحَرِّمُ عَلَيْهِمُ الْخَبَائِثَ), which means: “and prohibits for them the evil.” (Surah al-A’raf:157)

There are also researchers who claimed: “If someone eats swine regularly, it will decrease the feelings of jealousy towards what has been prohibited.” (See al-Halal wa al-Haram fi al-Islam, pg. 69-70)

Dr Joseph Mercola, a renown medical expert in the United States said: “According to Consumer Reports, 69 per cent of all raw pork samples tested were contaminated with the dangerous bacteria Yersinia enterocolitica, which can cause various health issues.”

Dr Muhammad Abdul Khair said, there are various illnesses that are caused by eating the flesh of swine: “The flesh of swine contains the larvae of tapeworms. These parasites will infect the people who eat the flesh of an infected swine. Till this day, there are no records of which any swine is free from this infection.” (See Ijtihadat fi al-Tafsir al-Quran al-Karim, pg. 112)

Dr Zakir Abdul Karim Naik in “20 Frequently Asked Question About Islam” said: Among the reasons as to why the flesh of swine is prohibited is: Eating the flesh of swine will result in not less than 70 types of illnesses or diseases, which includes:

To close, we would like to include the words of Dr Yusuf al-Qaradhawi: It is not a necessity for a Muslim to know or have a deep knowledge of what and why something is considered as harmful and bad, for only the harmful and bad things are prohibited by Allah SWT. Sometimes, there are things that are unknown to someone in certain times or era, while it will be made clear in the following era. Thus, the attitude that every Muslim should have is: “We hear and we obey.”

The greatest example of this is the prohibition of eating swine. Not a single Muslim knew the reason of why it is prohibited during the time of the Prophet PBUH except that it is considered as dirty. After time and years passed and through the innovation of technology, now the reality of how harmful is the flesh of swine for it is infected with worms and microscopic bacteria is known. (See al-Halal wa al-Haram fi al-Islam, pg. 33)

May Allah SWT give us the understanding regarding this religion and the strength to follow and obey all of His commandments and avoid all of His prohibitions. Amin.