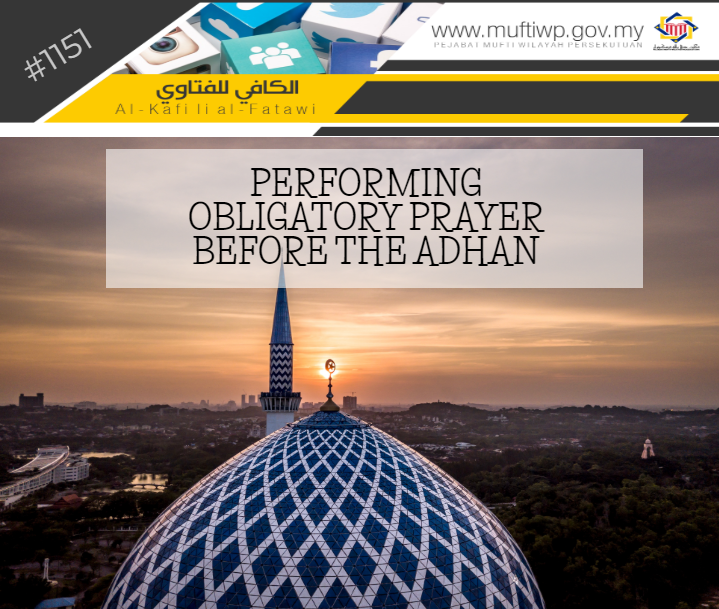 What is the ruling of performing obligatory prayer without waiting for the adhan?

The worship of prayer is a type of worship where the starting and ending time of it is specified, Allah SWT state:

Indeed, prayer has been decreed upon the believers a decree of specified times.

Ibn Qudamah said: “Whoever performs the prayer before the time for prayer, the prayer is invalid according to the majority of the scholars’ opinion, whether it is performed on purpose or otherwise, or whether it is just a part of the prayer or for the whole prayer. This is the opinion of az-Zuhri, al-Auzai’e, asy-Syafie dan Ashab ar-Ra’yi. Narrated from Ibn Umar RA and Abu Musa RA, they both repeated the Subuh prayer that they performed before the time for Subuh prayer has started.” Refer al-Mughni (2/45).

If a person did not determine for sure whether the time for prayer has started before praying, then he found out afterwards that the time of prayer has not started, then his prayer is invalid and it is considered as if he has not prayed any obligatory or sunnah prayer. Refer Nihayah al-Muhtaj (2/5)

These situations are cited by Imam Muzani from Imam al-Syafie:

Prayer performed before the adhan can be divided into two situations:

However, we advise all of us not to be hasty in performing prayer before the adhan because usually the adhan will be called out as soon as the time of prayer started, unless in certain places where they call the adhan a bit later or when a person is in a hurry or has to handle emergencies or unavoidable important matters.

Performing prayer before the adhan after the time for prayer has started without any urgent need is a contradiction from what is prioritized (khilaf aula), which is congregational prayer in mosques or surau which is an encouraged commandment.

May Allah SWT give us goodness and the right understanding in understanding His commandments and subsequently give us the strength to practise it. Amin.