AL-KAFI #1153: THE MEANING OF KAFA’AH (COMPATIBILITY) IN MARRIAGE 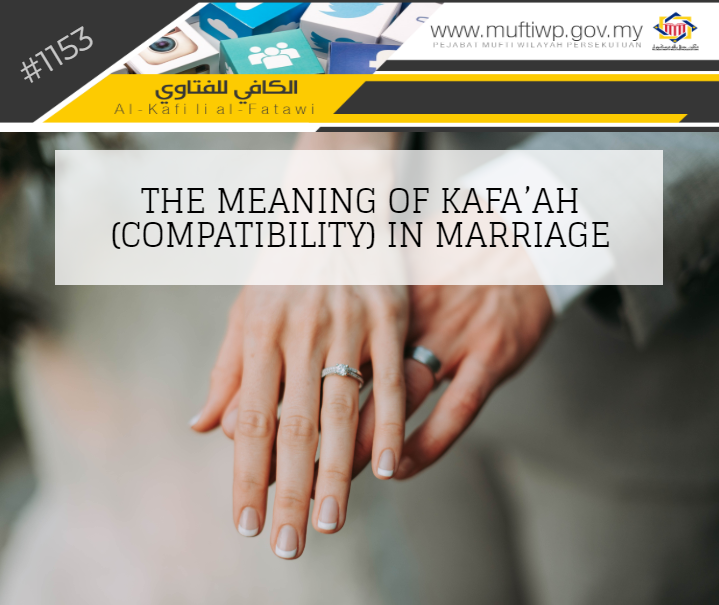 Assalamualaikum SS Dato’ Seri Mufti, what is the meaning of kafa’ah (compatibility) in marriage?

The author of the book al-Fiqh al-Manhaji (2/520-525) when discussing choosing a partner who is compatible states: Kufu’ means the compatibility of status between a man and woman is several aspects:

A fasiq man is not compatible with a pious woman. This is in accordance with the statement of Allah SWT:

“Then is one who was a believer like one who was defiantly disobedient? They are not equal.”

However, we should differentiate between a religious person and a person who learns religion. The term used by the Prophet PBUH for zat al-din (ذات الدين) women is known as mutadayyin. While for those who learn religion would surely have the knowledge and good understanding, but it may not be practised. What is necessary is to find a partner who obeys the religion and it would be better if he has the knowledge and understanding of it.

A person who has an occupation of lower status such as a cleaner, farmer and janitor is not kufu to marry the daughter of a scholar, judge or businessman.

In reality, occupation can be divided into two. There are honoured but not wealthy. There is also common work but with creativity, innovation and the right marketing strategy, it could generate millions of ringgits through investment and business.

Do not have any disability that the partner has a right to ask for fasakh for the marriage. A mentally imbalanced man or with polio disease is not kufu’ with a woman who does not have the disease.

Disability is divided into two: First, humiliating diseases such as HIV, AIDS, leprosy, mental illness and others. This matter is best avoided unless there is a clear agreement and understanding. Second, minor disability such as a defect in certain body parts but it does affect its function. For these cases, it does not prevent a person from leading a normal life. Sometimes, we see that these couples have a happier life together.

The reason is couples who are compatible with each other do not have differing lifestyles and are acceptable in each other’s lives. Thus, a person does not need to change their normal lives for they have similar lifestyles.

However, the wife-to-be and her wali can abrogate the kufu’ condition. If a woman is married by her wali to a man who is not kufu’ with her with her consent, then the marriage is valid.

This is due to the fact that kufu’ is the right of the woman and her wali. If they agree to abrogate it, then it should not be questioned. (See al-Fiqh al-Manhaji, 2/520-525)

This is in accordance with a hadith where the Prophet PBUH said:

"Choose the best for your sperm, and marry compatible women and propose marriage to them."

In our opinion, among the important matter in understanding kufu’ is for the couple themselves and not solely for their families. For example, two students who both graduated from university, while their families have a different status. However, there is understanding and compatibility between them as well as a high level of tolerance between them. Then for this case, it can be considered.

In current times, the situation has changed greatly from forty or fifty years ago where relationships are no longer limited to one’s family or village but has crossed states, countries, races, skin colours and others. Thus, the most important characteristic is piety in the couple. As well as love and care that grow together in the couple’s lives.

Lastly, we end with a supplication to Allah SWT:

[1] Syeikh Abdullah Nasih ‘Ulwan in his book Tarbuyah al-Aulad said: Starting with this principle, Uthman bin Abi al-‘As al-Thaqafi advised his children to choose the place to put their sperm to avoid disobedient lineage. And this is what he told them: “O my children, a person who is marrying is the same as a person who is planting a tree, he has to analyse where he intends to plant his seeds. A bad lineage would seldom have children; thus, the choice must be made.”