AL-KAFI #1161: IS THE ABLUTION AND OBLIGATORY BATH VALID IF THERE IS DIRT UNDER ONE’S NAILS AND ON THE BODY? 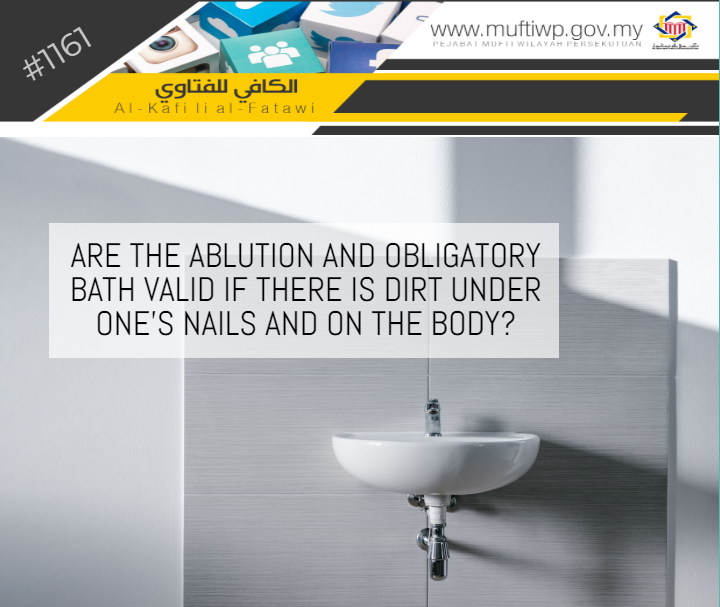 Assalamualaikum. Are the ablution and obligatory bath valid if there is dirt under one’s nails? Second, is it obligatory to remove dirt and grime when performing obligatory bath and ablution? Does dirt prevent water from reaching the skin?

Islam is a religion that emphasizes cleanliness and hygiene in our daily lives. Allah SWT loves His slaves who always purify their heart and physical body. Allah SWT state:

Among the evidences of this is Allah SWT’s sanctioning of the worship of purification such as obligatory bath and ablution for those who experience minor or major hadas as a condition for other worship such as for the recitation of the Quran and prayer. (Refer Syarah al-Yaqut al-Nafis, pg. 67)

Imam al-Nawawi said, there three matters that would obligate the obligatory bath which is, the insertion of hasyafah (penis) into a vagina, excretion of semen and menstruation or nifas (post-natal bleeding) (Refer Al-Majmu’ Syarah Muhazzab, 2:213). If a person does or experiences any of the three matters, then it is obligatory to perform the obligatory bath before performing other worship. Allah SWT states:

“And if you are in a state of janabah, then purify yourselves.”

Furthermore, it is also sunnah for a person who is performing the obligatory bath to scrub his whole body. Moreover, according to Imam Malik, he obligates it, for just washing with water is insufficient and incomplete (Refer Syarah al-Yaqut al-Nafis, pg. 86). However, if the impurity is too little, such as some dirt, it does not prevent water from reaching the skin. Thus, the obligatory bath is valid even when the dirt is not washed off first.

Whereas, for dirt under the nails, the scholars have differing opinions upon this matter:

First opinion: If the dirt is from heat or natural body reaction, then it does not affect the validity of the obligatory bath and ablution. However, if the dirt is from external environments such as flour, soil and others, then it is wajib to be removed first so that water could reach underneath its surface.

Second opinion: Imam al-Ghazali in his book Ihya’ Ulumuddin and scholars who agree with him state that it is not obligatory to remove dirt under one’s nails. (Refer Syarah al-Yaqut al-Nafis, pg. 69)

We are inclined to choose the first opinion as a precautionary step for there is concern that the dirt may prevent water from reaching the skin and to avoid the khilaf of scholars. Thus, we should first remove the dirt under the nails before performing the ablution or obligatory bath.

According to the above discussion and explanation, we would like to conclude that dirt does not prevent water from reaching the skin. Thus, obligatory bath and ablution are valid even if there is dirt on the body parts that are washed. However, it is best to scrub and remove it when we are taking the obligatory bath or ablution to ensure the cleanliness of our bodies.

While, regarding dirt or impurity under one’s nails which are from external environment and not from natural body reactions, then it is obligatory to first remove and clean it off before performing ablution and obligatory bath.