AL-KAFI #1167: IS IT PERMISSIBLE TO PERFORM THE FRIDAY PRAYER ON A HUGE SHIP? 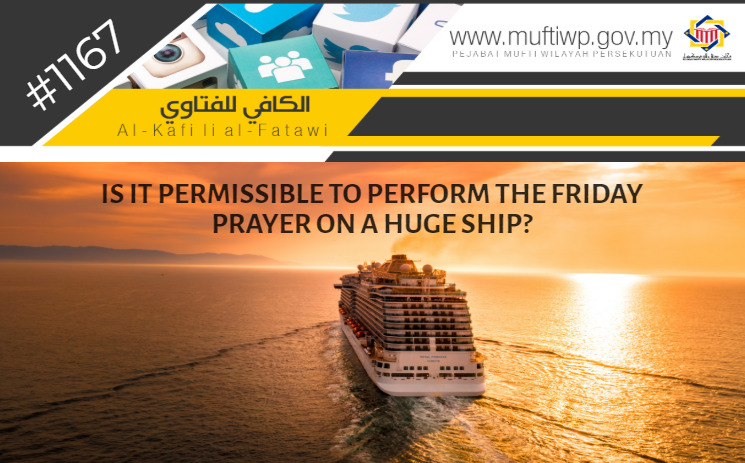 Assalamualaikum SS Dato’ Seri Mufti. I work as Navy officer. Every month I would deploy to the sea for my work. Coincidently, it is on a Friday. Is it permissible for me to perform the Friday prayer on the ship?

Thank you for your question. We try to understand the issue that you and many others in a similar situation as yours, such as sailors who worked on ships for months before ever reaching land again. This issue should be discussed by Fatwa Committees for the original obligatory condition for Friday prayer is unfulfilled when one is at sea or travelling in ships. The reason is, the term temporary resident or resident is only applicable on land and not at sea. However, today, huge ships are built accommodating thousands of passengers and facilities which includes kitchen, swimming pools, halls, restaurants, surau and others.

The obligatory conditions of Friday prayer are stated in fiqh books such as al-Fiqh al-Manhaji (1/498-499):

One must be a resident where the Friday prayer is performed. Friday prayer is not obligated on a traveller even if the distance for the travel is short. However, it is on the condition that the traveller starts his travel before the sun rises on Friday and he did not hear the adhan for Subuh prayer in his place of residence.

All the above conditions are stated by the Prophet PBUH:

In another hadith, the Prophet PBUH said:

“Whoever believes in Allah SWT and the Hereafter, then, it is obligatory for him to perform the Friday prayer except for a woman, traveller, slave and sick person.”

“The Friday prayer is obligatory on him who hears the call.”

Hence, it is impermissible to perform Friday prayer even if there are more than 40 people. We suggest that he performs the Zuhr prayer whether tamam or qasar or jamak with Asar, as long as he is in the duration of travel. We also suggest that on Fridays, a tazkirah session is arranged before Zuhr, so that everyone could benefit from the knowledge and wisdoms before performing the congregational Zuhr prayer.

Questions such as this should be presented to Fatwa Committee, so that it could be reviewed and discussed, reanalysing the attributes of prolonged travel on sea; is it similar to the activity such as living on land because the huge ships available today are so big that one could not even feel the waves.

Hopefully, this answer would give us understanding in following the commandments of Islam. Amin.