AL-KAFI #1181: THE MEANING OF TWO MARHALAH FOR JAMA’ AND QASAR 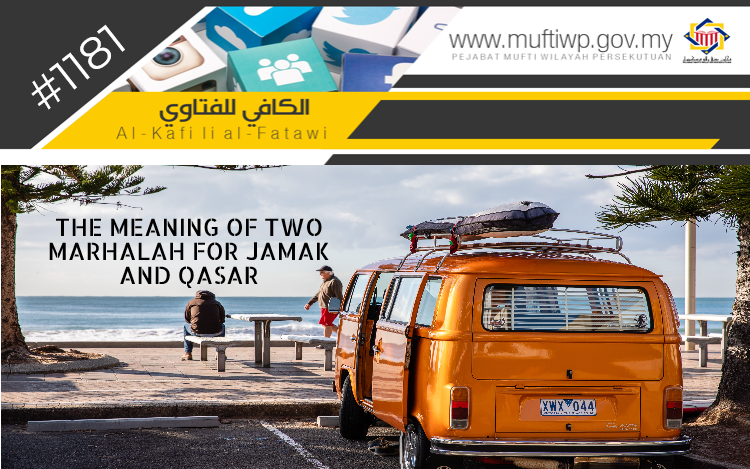 Assalamualaikum ustaz, what is meant by 2 marhalah for qasar prayer?

“And when you travel throughout the land, there is no blame upon you for shortening the prayer,”

The above verse is evidence on the permissibility of qasar prayer (shortening of the 4 rakaat prayer into 2 rakaat prayer) in al-khauf (terrifying) situations such as during war. However, there are Sahih hadiths and ijmak (consensus of scholars) that rule it permissible to qasar (shortening the prayer) in times of peace.

Qasar is only for the four rakaat prayers (zohor, asar and isyak) shortened into two rakaat on certain conditions.

There are five rulings on travel:

Marhalah literally means a stop for travellers to rest in their travel in a day. Two marhalah is a measurement of distance that makes it permissible for a person to perform qasar and jama’ for prayers. The meaning of 2 marhalah measurement is as the following:

Whereas if referred to the 4th Edition of Kamus Dewan pg.999, marhalah means a distance measurement of approximately 28 miles or 45.06 km.

As for the modern-day approximation of 2 marhalah is between 85 – 90 km or equivalent to 56 miles.

To conclude, scholars stated the measurement of distance for 2 marhalah is only in approximation. The distance is more of a taqribi (approximation) and not tahdidi (accuracy), thus, a person is permitted to perform qasar prayer after he has travelled for 2 marhalah (as explained above).

Hopefully, this explanation would give us understanding in this matter.