AL-KAFI #1188: THE RULING OF PARTICIPATING IN MARATHONS ORGANIZED BY ALCOHOLIC BEVERAGES COMPANY 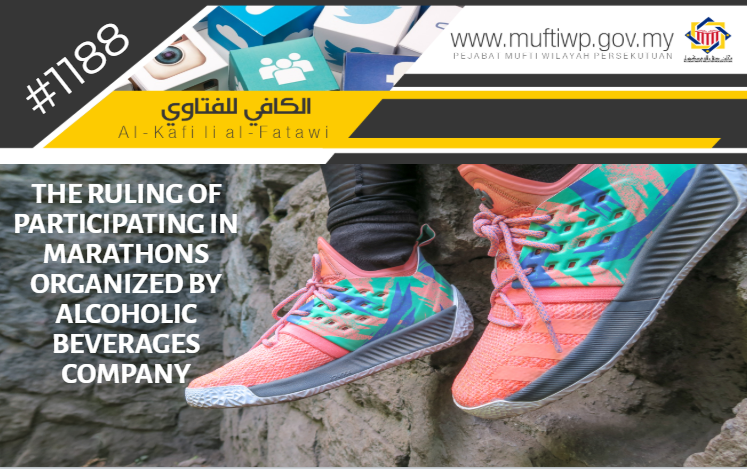 Assalamualaikum SS Dato’ Seri Mufti. What is the ruling of participating in marathons organized by alcoholic beverages company? Hope for an explanation. Thank you.

Marathon is a race involving people walking, jogging or running for a set distance of 42.195 kilometers (26.219 miles) [1]. Generally, Islam does not prohibit competitions. Thus, competition or races such as this do not contradict the shari’ah of Islam. In a hadith narrated by Saidatina ‘Aisyah R.Anha, he said:

“The Prophet PBUH raced against me and ran ahead of me and then I ran ahead of him beating him. That is until I gained weight and he always beat me in our race. Then, he said: “This is payback for previous losses.”

In general, in organizing any race or competition, it must fulfil the following criteria:

Answering the above question, we could conclude that anything that leads to what is prohibited is prohibited. The sin of the prohibited action is not just on the doer, but also to those who contribute towards it, whether it is in the form of money or moral support. Everyone will be burdened with the sin comparable to the contribution he made. (See: Halal dan Haram di Dalam Islam, Dr. Yusuf al-Qaradhawi, pg. 27)

Every mukallaf is responsible for everything that he did in this world. In this issue, we are inclined to state that it is prohibited and sinful to participate in any marathon or any competition organized by gambling or any companies that perform prohibited business. The reason is, by participating it is seen as a form of support to the organizer. In a hadith narrated by al-Nu’man Ibn Bashir RA, the Prophet PBUH said:

Hence, in order to avoid matters which are doubtful, situations such as this should be avoided. Hopefully, the above explanation will open our minds and hearts to continue practising the true teachings of Islam.