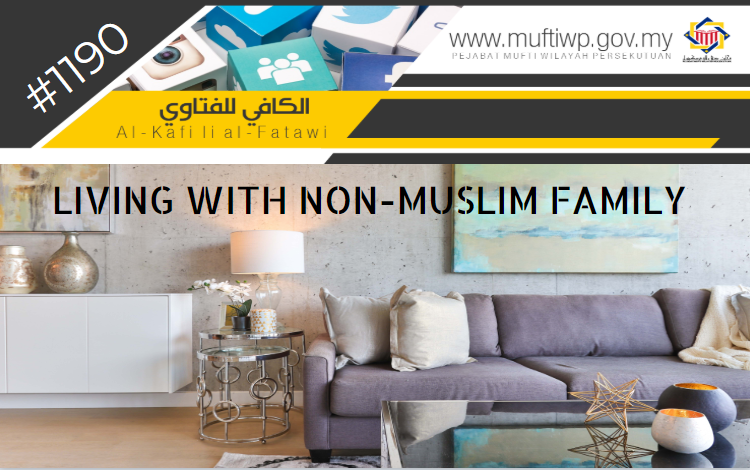 I have just gotten married to my wife who had just embraced Islam. Now, I live with her family who have yet to embrace Islam. Hope to have an opinion from you regarding my status who live with my wife’s family.

Parents are two individuals of whom it is wajib for us to obey as long as they do not ask us to commit sins. Children are obligated to do good towards both their parents even if they are not a believer. The relationship between parents and child remains even when they have different religions. Allah SWT states:

“But if they endeavour to make you associate with Me that of which you have no knowledge, do not obey them but accompany them in [this] world with appropriate kindness,”

Imam Ibn Kathir Rahimahullah said: “If both your parents force you towards their religion, then don’t obey them but at the same time it does not prevent you from doing good and serve them both with the best possible way. Learn from the story of Sa’ad bin Abi Waqas who served his parents with wisdom which led to his mother accepting it.” See Tafsir al-Qur’an al-‘Azim (6/402).

Narrated by Asma' bint Abu Bakr: My mother came to me, hoping (for my favor) during the lifetime of the Prophet. I asked the Prophet, "May I treat her kindly?" He replied, "Yes." Ibn 'Uyaina said, "Then Allah revealed: 'Allah forbids you not with regards to those who fought not against you because of religion, and drove you not out from your homes, that you should show them kindness and deal justly with them.”

The Ruling of Using Containers Used by Non-Muslims

From Abu Tha`laba Al-Khushani: I came to the Prophet (ﷺ) and said, "O Allah's Messenger (ﷺ)! We are living in the land of the people of the Scripture, and we take our meals in their utensils,” The Prophet (ﷺ) said, "As for your saying that you are in the land of people of the Scripture, you should not eat in their utensils unless you find no alternative, in which case you must wash the utensils and then eat in them,”

From this hadith, the original restriction from the Prophet PBUH is haram and it can be understood that the restriction of using the containers of non-Muslims is when there is no other alternative.

However, there is a hadith where the Prophet PBUH once eaten using the containers of the People of the Book and the verse in surah al-Maidah (وَطَعَامُ الَّذِينَ أُوتُوا الْكِتَابَ حِلٌّ لَكُمْ) where it can be understood that the food is prepared by their hands using their containers. Thus, the restriction is not haram but makruh (undesirable). Refer Mausu’ah al-Fiqhiyyah al-Kuwaitiyah (1/123), Nihayah al-Muhtaj (1/127), al-Majmu’ (1/263).

In our opinion, it is not an issue to live with non-Muslim family who has yet to embrace Islam, in fact, it can be a great opportunity to benefit from where one should showcase good character and conduct as well as offer direct explanations about Islam for the family members who hasn’t embrace islam. Allah SWT states:

“Invite to the way of your Lord with wisdom and good instruction,”

Let us all learn from the lessons of the sirah of the Prophet PBUH who continue to convey the dakwah towards his uncle Abu Talib up to the final seconds of his life. He never gave up to do dakwah although ultimately Allah SWT has fated his uncle to die as a disbeliever.

Regarding food and drinks, we advise you to not eat from those prohibited in Islam such as swine, alcoholic beverages and slaughter of animals not according to syarak. However, it does not mean that we are prohibited from eating together with our non-Muslim family members. Try to find an alternative so that we can join and be together with them without any discomfort.

However, we also wanted to advise you to try to move to another place if there is an opportunity to do so and at the same time maintain the relationship and silaturrahim with family members who have yet to embrace Islam. This would offer comfort for all in practising all of the Islamic teachings without any hindrances.

May Allah SWT grant us goodness and sahih understanding in practising His commandments and subsequently give us the strength to practise it. Amin.