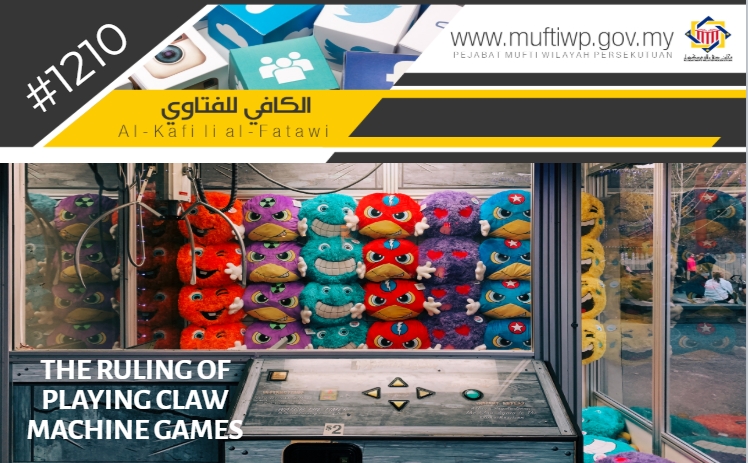 Assalamualaikum SS Dato’ Seri Mufti. I observe that recently there are numerous claw machine games that operate in shopping malls. My question is, what is the ruling of playing these machines? Hope for an explanation. Thank you.

Every Muslim who professes that he is a believer and adheres to the teachings of Islam to ensure that everything in his life is in accordance with the syarak. This includes one’s physical actions as well as what is in their hearts. In a hadith narrated by al-Nu’man bin Bashir RA, the Prophet PBUH said:

Claw machine is a type of arcade game where one uses a claw to try to get the prizes from inside the machine, paying a certain amount as a bet. [1] Specifically and practically, this game has elements of gambling that is prohibited in Islam. Allah SWT state:

Syeikh al-Maraghi said, gambling is the source of enmity and hatred among those who gamble. Naturally, people who gamble will be hostile towards those who win and will be happy on the sadness of others. This will lead to the violation of the rights of one’s parents, wife and children. Ultimately, they will be ridiculed and hated. It is a fact that gambling can sometimes make a poor person rich, but it extorts the property of others, especially for first time losers who will take it as a challenge and try to win the game again and again. Sometimes, someone will keep on losing until he has spent all of his money. At that time, he will become poor and become hostile towards those who win and defeated him. (See: Tafsir al-Maraghi, 4/1691)

Any type of games that depends on luck without any use of one’s intelligence such as games of dice, and cards (that involves betting) and others is prohibited. The reason is, it will make one grow accustomed of depending on one’s luck in anything that he does. They will then believe and depend on luck for anything in this life. This games negatively affects humans. (See: al-Fiqh al-Manhaji, 8/146)

Answering this issue, the concept featured in claw machine games denies the rights of the buyer to choose a prize that he wants according to the payment he made. Hence, this situation violates the proper principles of trade such as khiyar (choice). In classifying certain games as gambling, the scholars set the following conditions:

As a conclusion, we are inclined to state that claw machine games are prohibited. The reason is, the game directly denies and neglects the rights of the player to choose the prize he wanted based on the price that he paid. Furthermore, this game is based on one’s luck which is prohibited in Islam.

Hopefully, this explanation will open the minds of people to avoid committing anything that is prohibited in Islam. Amin