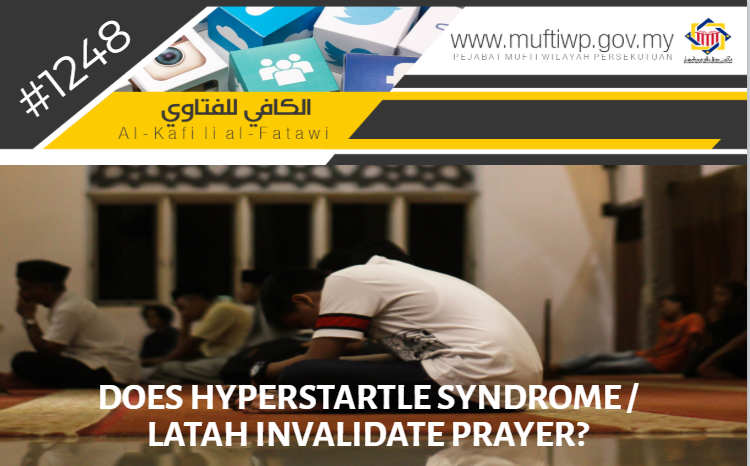 I want to ask SS Mufti. I have a problem where I experience the problem of latah when I am startled, such as from the sudden sound of thunder and others. The words that usually comes out from my mouth is “Oh man!”. Will this invalidate my prayer even if it is an involuntary action?

In answering the above question, two things should first be understood, which are; the definition of the word latah and scholars’ discussion regarding the matters that invalidate prayer.

Hyperstartle syndrome or commonly known as latah (neurotic or delirious behaviour usually induced by a startle) is defined as any involuntary actions or words uttered when one is startled. (See: 2nd Edition of Kamus Dewan)

From a medical perspective, it is considered as a neurological disorder that results in a person (usually woman) to become unconscious of his actions; imitating an action, obeying an instruction or uttering certain words involuntarily when he is startled or others. There are four terms used to describe the symptoms of this involuntary action (latah) (See: Malaysia’s Ministry of Health Official website [1])

“In English, it is also known as dissociative disorder. It means then when one is under extreme pressure, he will dissociate from his surroundings. A person experiencing hyperstartle syndrome is unconscious of his actions. The treatment for this syndrome is to control the amount of pressure he is experiencing. First, is through breathing techniques through the abdomen. We also recommend structured meditation. We also suggest exercise to decrease one’s stress levels which will directly affect this syndrome. Furthermore, when one is pressured, he would have negative thoughts. We should teach them to be optimistic. All of these will decrease the symptoms of this syndrome. Usually, hyperstartle syndrome is from genetic factors, where it is not specific for hyperstartle syndrome but other neurological problems.”

While Dr Muhammad Muhsin Ahmad Zahari, Psychiatrist Consultant Specialist and senior lecturer said, a person experiencing hyperstartle syndrome is incapable of controlling their syndrome; whether their actions or words. They are aware of their actions but are unable to control it. Hyperstartle syndrome is harmful especially for people who have heart problems. Thus, if they consult a specialist for their problem, the specialist would first try to identify what actually induce the person to have their hyperstartle episode.

Second, when analysing the ruling for the question asked, we must understand the rulings related to prayer. Prayer is a worship obligated by Allah SWT to His every slave. Prayer includes the requisites and sunnah of prayer as well as the matters that invalidate prayer.

The restriction against uttering words other than the recitations in prayer is in accordance with Allah SWT’s statement:

“Maintain with care the [obligatory] prayers and [in particular] the middle prayer and stand before Allah, devoutly obedient.”

Imam al-Tabari explained that the above verse is revealed after the incident where a companion of the Prophet PBUH talks with another companion in prayer, this incident is recorded in a narration from Zaid ibn Arqam RA, where he said:

According to the above evidences, the jurists (fuqaha’) have agreed that uttering words other than the recitations in prayer invalidate prayer. The same is stated by jurists (fuqaha’) from madhab al-Syafie, al-Hanafi and and al-Hanbali, where uttering a word of more than two alphabets invalidate prayer. However, in madhab al-Syafie, uttering words in prayer when one forgets, or do not know of its restriction especially for those who just embraced Islam, lives far away from scholars or accidental utterance of words where if the custom of the place the words is considered light, then it is forgiven. See Mausua’h al-Fiqhiyah (27/117-118).

In this regard, madhab al-Syafie refer to the hadith narrated by Abu Hurairah RA to come up with the ruling:

However, as stated in madhab al-Syafie, the words uttered must be minimal. If the number of words is great, then the prayer is invalid.

We also advised those who experience hyperstartle syndrome to seek professional help in an effort to treat it. This is important to attain the perfection of worship and avoid the greater medical harm for them.

May all of us attain the blessings and guidance of Allah SWT in practising His commandments. Ameen.