AL-KAFI #1275: IS IT PERMISSIBLE TO PERFORM THE SUNNAH SIX DAYS OF SYAWAL FASTING AND QADHA (REPLACE) FASTING SIMULTANEOUSLY? 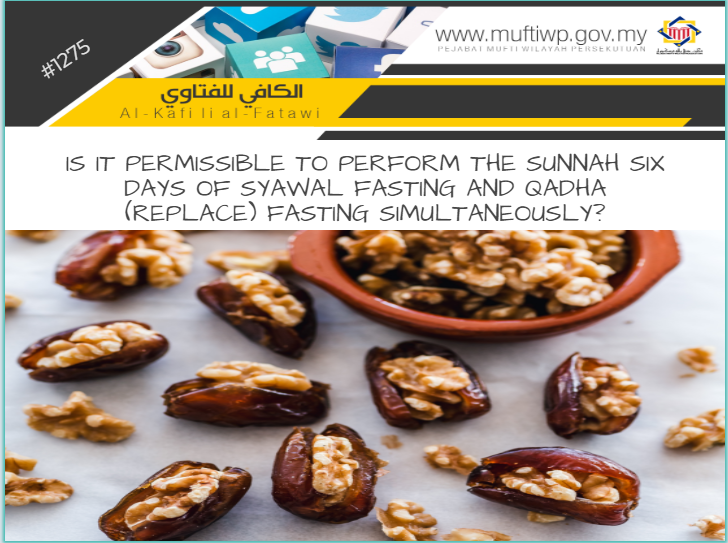 Whoever breaks his fast in Ramadhan without valid reasons stated by syarak is obligated to replace it immediately after the first day of Eid. He cannot prioritize the six sunnah syawal fasting over his qadha (replacement) fasting.

However, if someone does not fast in Ramadhan due to valid reasons (permitted by syarak), then it is permissible for him to prioritize the six days of sunnah syawal fasting over his qadha (replacement) fasting because the time for him to replace his missed days is muwassa’ (a long duration).

Imam al-Syeikh Daud bin Abdullah al-Fathani Rahimahullah Taala said: “(And for those) people who does not fast due to valid reasons, then it is sunnah for him to perform the six days of sunnah syawal fasting, with the exception of those who breaks his fast without any valid reasons, then it is obligatory for him to immediately qadha (replace) his fast for it is makruh (undesirable) to perform the sunnah while he still has to replace the Ramadhan fasting days that he has missed without valid reasons, thus, he is obligated to prioritize performing his qadha fasting first.” (Refer Kitab Bughyah at- Tullab, pg. 128)

The Issue of Combining Two Types of Worships with One Intention

According to scholars, this issue is categorized as the issue of tasyrik (combining two types of worships using one intention), the rulings are as the following:

The question becomes, is the fast of both qadha and sunnah six days fating in syawal simultaneously is valid? Or is just one of the fasting valid? If it is done in ithlaq (general) form, do both or only one of it is considered accomplished?

Jurists from Mazhab Syafie have differing opinions regarding the issue of combining the intention of qadha Ramadhan fasting and the sunnah six days fasting in syawal.

Syeikhul Islam Zakaria al-Ansari Rahimahullahu Taala: “If someone fasts in syawal to qadha (replace) his Ramadhan fasting, or others, such as nazar fasting or other sunnah fasting, then he will obtain the reward of both. For the topic of discussion is regarding the 6 days of fasting in syawal…however, he will not receive the perfect rewards he wanted, unless he performs and set a specific intention for the sunnah 6 days of fasting in syawal. Especially for those who missed the Ramadhan fasting due to valid reasons and replace the fasting together with the sunnah fasting, it is not comparable to those who replace and perform the sunnah fasting separately.” (Refer Kitab Syarqawi ‘ala al-Tahrir)

Imam Ramli Rahimahullahu Taala said, he was once asked regarding the qadha of Ramdhan fasting and the rewards of the sunnah 6 days of syawal fasting, he then answered: “The qadha Ramadhan fasting is valid even if he combined it with other fasting. As it is valid to combine it with the sunnah 6 days of syawal fasting. This issue has been answered by numerous contemporary scholars.” (Refer Fatawa Imam Ramli, 2/339)

Imam Ibnu Hajar Al-Haitami Rahimahullahu Taala was asked regarding someone who sets the intention of sunnah fasting together with obligatory fasting: “If it is intentioned for both (sunnah and obligatory fasting), he will receive the rewards for both but if he sets an intention for only one of them, then only one type of fasting is rewarded.” (Refer Kitab Al-Fatwa Al-Kubra, 2/75)

Some scholars state that someone who perform the qadha Ramadhan fasting together with the sunnah fasting in Syawal, then both are valid and rewarded. The reason is it is analogically deduced (qiyas) with someone who enters a mosque then perform 2 rakaat prayer; obligatory or sunnah rawatib prayer (sunnah prayers that accompany the obligatory prayers), then he will also receive the rewards of sunnah tahiyyatul masjid prayer, if he performs the prayer before he sits down.

Imam Sulaiman al-Bujairimi Rahimahullahu Taala said: “One is rewarded with sunnah Tahiyyatul Masjid when someone perform an obligatory or sunnah prayer, whether or not someone sets an intention for it. This is in accordance with a hadith narrated by Imam Bukhari and Muslim: “When one of you enters the mosque, he should pray 2 rakaat before he sits down” and thus, the meaning of praying before sitting down from the hadith is accomplished by performing other obligatory and sunnah prayers.” (Refer Kitab Hasyiah al-Bujairimi 1/280)

A similar statement is issued by Syeikh Islam Zakaria Al-Ansori Rahimahullahu Taala: The sunnah 2 rakaat or more prayer is accomplished (what is meant here is one will be rewarded for the sunnah prayer even if it is done together with other obligatory or sunnah prayers), whether it is intentioned together or not. This is in accordance with a hadith narrated by Imam Bukhari and Imam Muslim Rahimahulaahu Taala: “When any one of you enters a mosque, do not sit down until you have prayed 2 rakaat.” Thus, the meaning of praying before sitting down is fulfilled when someone performed other obligatory or sunnah prayers. (Refer Kitab Fathul Wahab Syarah Manhajul Tullab 1/67)

Imam al-Ramli Rahimahullahu Taala said: “And if someone perform the syawal, qadha, nazar or any type of fasting such as the Asyura fasting, he will receive the rewards for it, as issued by a fatwa by his father (the father of Imam al-Ramli), the same is stated by al-Barizi, al-Asfahuni, al-Nasyizi, al-Faqih Ali Soleh al-Hadrami and others, however, the rewards are not comparable if the fasting is done separately.” Thus, the same ruling applied to the qadha fasting of Ramadhan and the sunnah six days syawal fasting. (Refer Kitab Nihayah al-Muhtaaj, 3/208-209)

Iam al-Suyuti Rahimahullahu Taala said: “If someone perform a sunnah fasting, such the fasting on the day of Arafah at the same time set the intention of fasting for qadha, then al-Barizi has issued a fatwa that the fasting is valid and he will be rewarded for both fasting. The same is applied if someone just set the intention of (I am fasting), it is the same as the issue of the sunnah tahiyyah masjid prayer.” (Refer Kitab Ashbah Wan Nazoir, pg. 61)

In Syarah al-Tanbih written by al-Hafiz al-Suyuti Rahimahullahu Taala, a fatwa from al-Baarizi Rahimahullahu Taala, he said: “If someone perform a sunnah fasting such as fasting on the day of Arafah, qadha or nazar or kafarah fasting, and it is intentioned together with the sunnah Arafah day fasting, then both are valid, even if the intention is just as I am fasting. However, al-Isnawi contradicts the above, stating that the qiyas is invalid in explaining the association and combining between the two. According to him, only the obligatory fasting is valid and rewarded.”

Although that is the case, what should be taken into consideration is that the meaning of both the sunnah six days of syawal fasting and the qadha Ramadhan fasting is incomparable to if the fasting is performed separately.

As a conclusion, according to the final opinion, it is prioritized for someone to perform the sunnah six days of syawal fasting and the qadha Ramadhan fasting separately. However, combining both fasting is permissible and both will still be rewarded according to a weak opinion. However, hastening in replacing the Ramadhan fasting is a commendable deed and sanctioned by syarak especially for those who neglects his fasting without any valid reasons according to syarak.

May Allah SWT included us all together with the people of taqwa.