AL-KAFI #1313: HUMANS DISPUTING IN FRONT OF ALLAH IN THE HEREAFTER 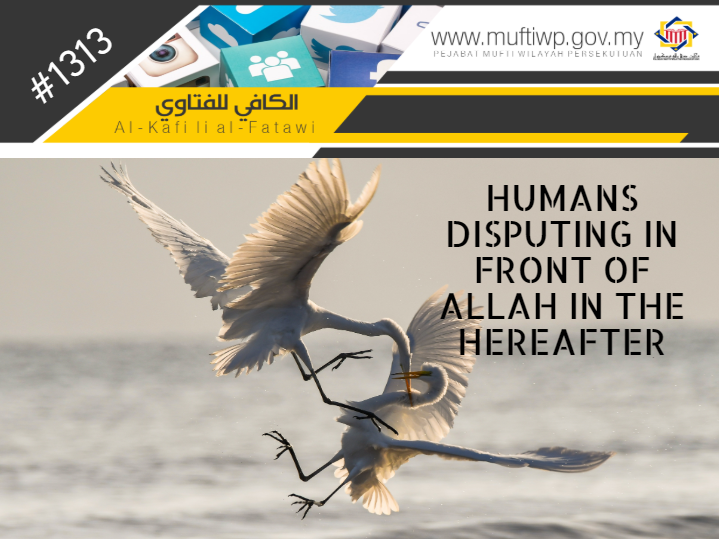 Assalamualaikum SS Mufti. I once heard that in the hereafter we will argue, disagree and quarrel with each other in front of Allah SWT. Is this true?

“Then indeed you, on the Day of Resurrection, before your Lord, will dispute.”

“The verse is revealed to us and we did not know as to who it is that is mentioned. We asked: With whom will we have disputes with? There is no animosity between us and the Ahl al-Kitab. Then with whom are we going to argue with? Until the time of fitnah, then Ibn Umar R.Anhuma said: This is what has been promised by our Rabb Azza wa Jalla, where we will have disputes.”

Abu Sa’id al-Khudri RA said: I used to say, “Our God is the same, and so is our religion and prophet, thus, what is the reason for the dispute? Then, during the Siffin war, some of us are against us. It was during that time that we understood.” (See al-Jami' li Ahkam al-Quran, 18/276)

While Ibnu Zaid said: “What is meant is the Muslims and the disbelievers.” (See Tafsir al-Quran al-Azim, 7/105)

Al-Wahidi said: “It means between the believers and the disbelievers, and the mistreated with the abuser.” (See al-Wajiz fi Tafsir al-Kitab al-'Aziz, 8/100)

Imam Ibn Kathir stated several opinions of scholars: “The strongest opinion is that it is a general statement. Wallahua’lam.” (See Tafsir al-Quran al-Azim, 7/105)

Syeikh al-Maraghi commented on the above verse like the following: “All of you will die, and they will die too. Then you will have disputes with them in front of your God. Afterwards, you will be able to refute their arguments proving that you really did convey the message of Allah SWT, but they still rejected it.

Then, the disbelievers will argue amongst themselves regarding who should be held responsible for their disbelief. They blamed their predecessors saying: “We followed you, but you have misled and misguide us.” While the leaders among them would say: “We ourselves are deceived by the shaytan and our fathers before us.” (See Tafsir al-Maraghi, 12/5888)

Syeikh Dr Wahbah al-Zuhaili in al-Tafsir al-Munir (12/250-253) states: In front of Allah SWT, the judgement process of the disputes that they have in this world regarding their disagreements in terms of tauhid and shirk will take place. Allah SWT will judge all of you, then He will save the mukmin who are mukhlis and muwahhid and punish the disbelievers who deny the truth and commit shirk.

The verse (ثُمَّ إِنَّكُمْ يَوْمَ الْقِيَامَةِ عِندَ رَبِّكُمْ تَخْتَصِمُونَ) is not specific for the disputes in the hereafter between the mukmin and the disbelievers. It is a general verse which includes everyone who had disagreements in this world, then the disagreements will be judged in the hereafter. It also means that the Prophet PBUH will have a conversation with his ummah reminding them how he had conveyed Allah SWT’s messages, but they rejected and deny them without presenting reasonable reason or evidence. (See al-Tafsir al-Munir, 12/250-253)

In a hadith narrated by Zubair bin Awwam, he said: When verses 30 and 31 surah al-Zumar (the above-stated verses), Zubair asked: “O Rasullullah, what are the things that happened among us in this world and the issue will be raised again in the hereafter aside from our personal sins?” The Prophet PBUH said:

“Yes, true. Everything will be judged again until each person recovered their rights.”

In another hadith narrated by ‘Uqbah bin Amir, he said: The Prophet PBUH said:

“The first two people who are going to start arguing in the hereafter are two neighbours.”

“By Him in Whose Hand my soul is! indeed, everything will be in dispute. Even two goats will argue regarding the reason they gore each other.”

In a hadith narrated by Anas RA, he said: The Prophet PBUH said:

“On the day of Judgement, a treacherous leader will argue with his people. Finally, his people won the argument over him. Then it is said to him: Go there! Stay in one of the corners of Jahannam (hellfire)”

To close, we include the statement of Syeikh Dr Wahbah al-Zuhaili: The end of every creation is the return to Allah SWT for judgement, disputes are solved with fair judgement for them, whether they are believers or disbelievers. Thus, both disbelievers and believers, the abuser or abused, all of them will argue with each other in the hereafter. In a narration from Abdullah bin Abbas R.Anhuma, it is stated: “The disputes on the day of Judgement are so dreadful that even the soul will argue with its body.”

“Do you know who is poor? They (the Companions of the Holy Prophet) said: A poor man amongst us is one who has neither dirham with him nor wealth. He (the Holy Prophet) said: The poor of my Umma would be he who would come on the Day of Resurrection with prayers and fasts and Zakat but (he would find himself bankrupt on that day as he would have exhausted his funds of virtues) since he hurled abuses upon others, brought calumny against others and unlawfully consumed the wealth of others and shed the blood of others and beat others, and his virtues would be credited to the account of one (who suffered at his hand). And if his good deeds fall short to clear the account, then his sins would be entered in (his account) and he would be thrown in the Hell-Fire.”

May Allah SWT make us be among those who are under the shade of Allah SWT’s blessings and save us from His punishments. Amin.