AL-KAFI #1321: THE RULING OF PERFORMING FRIDAY PRAYER IN MOSQUE’S YARD OR OPEN LAND 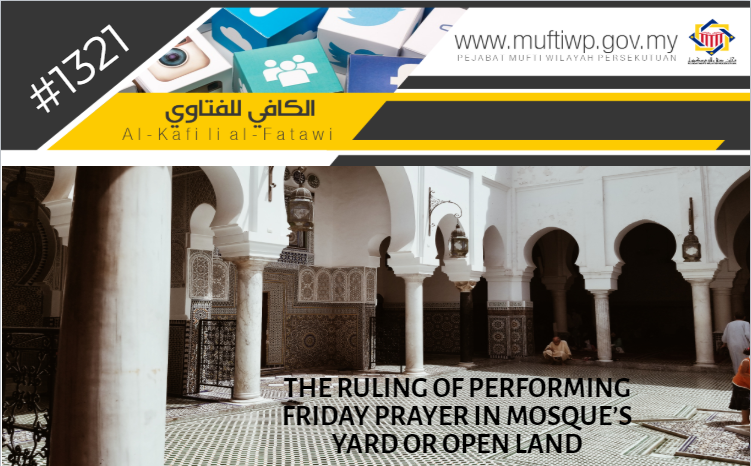 Hope for an explanation from Dato’ Mufti. Thank you.

In Islam, it is obligatory for every Muslim from among man, who has reached puberty, with sound mind and is residing in a certain place without any illness to perform Friday prayer in congregation. This is in accordance with evidences from the Quran, hadith and ijma’ (consensus of scholars). Allah SWT state in the Quran:

Imam al-Sarakhsi commented on the above verse stating that the commandment of quickly proceeding for Friday prayer has no other meaning than obligatory, and the commandment to leave trade which is originally permissible also proves its obligation. (Refer al-Mabsuth lil Sarkhasi, 2:21)

The same is stated by the Prophet PBUH:

Furthermore, the scholars have reached a consensus that it is obligatory for Muslim man, who has reached puberty, residing in a certain place and do not experience any illness or reasons that permit him to leave his Friday prayer. (Refer Mausu’ah al-Fiqhiyyah al-Kuwaitiyyah, 27:193). According to the above evidences, it is clear that Friday prayer is obligatory to be performed in a congregation.

The same is stated by Imam al-Nawawi RA in his book, al-Majmu’ Syarh al-Muhazzab, where he said:

There is no condition to perform it (Friday prayer) in a mosque, it is permissible to be performed in open spaces… whether they perform it in a corner or in the middle of the open space – if the building is destroyed, then the residents of the place come together again, then it is obligatory for them to perform Friday prayer whether it is under a roof or not. The reason is, it is now a place of residence. (Refer al-Majmu’ Syarh al-Muhazzab, 4:501)

Imam Abu Hanifah, Imam al-Syafie and most scholars hold the opinion that a mosque is not a condition to perform Friday prayer, the reason is, there is no Quranic or prophetic evidence that mentioned it needs to be performed in a mosque. (Refer Nail al-Awtar lil Syaukani, 3:279)

Meanwhile, Imam Malik sets a condition of the existence of a mosque for Friday prayer to be performed. Hence, it is invalid for residents to demolish their mosque in their residential area and let it be an unroofed place for them to perform Friday prayer. (Refer Fatawa Syar’iyah Wa Buhuth Islamiah, 1:274 / Bidayatul Mujtahid Wa Nihayatul Muqtasid, 2:336). However, we are inclined towards the majority of scholars’ opinion stating that it is not a condition of Friday prayer to be performed in a roofed mosque.

According to the above discussion, we would like to state that it is not a condition for Friday prayer to be performed in a mosque. Furthermore, it is permissible to be performed in mosque’s yard or other open land according to the majority of scholars’ opinion. Hence, the ruling of performing congregational Friday prayer in a mosque’s yard or open land is valid and will be rewarded by Allah SWT the same as if it is performed inside a mosque.

May Allah SWT give us understanding and guidance for us to be sincere in worshipping Him.