AL-KAFI #1323: THE RULING OF PERFORMING ACTS OF WORSHIP FOR WORLDLY GAINS 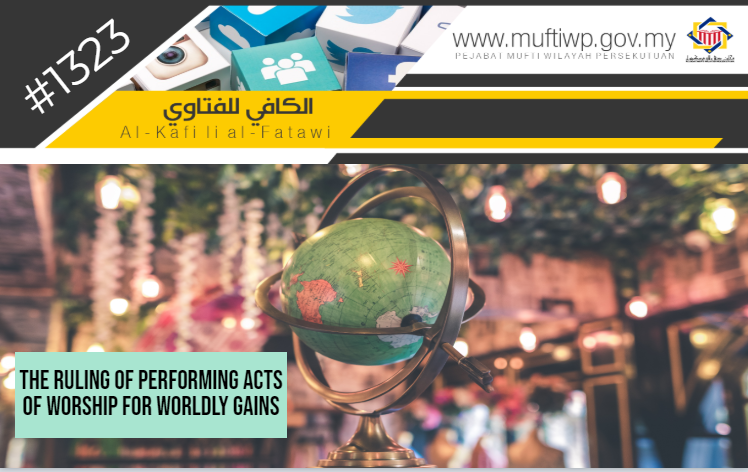 Assalamualaikum SS Dato’ Mufti. I have a question, is it permissible for us to perform acts of worship hoping to just get worldly gains. For example, we perform the sunnah Dhuha prayer and recite surah al-Waqiah to get rich?

“And they were not commanded except to worship Allah, [being] sincere to Him in religion, inclining to truth, and to establish prayer and to give zakah.”

“Indeed, We have sent down to you the Book, [O Muhammad], in truth. So, worship Allah, [being] sincere to Him in religion.”

Ibnu Kathir when commenting on the above verse explains the meaning of the phrase ‘فَاعْبُدِ اللَّهَ مُخْلِصًا لَّهُ الدِّينَ’ saying, “Worship Allah SWT as the one and only god. And enjoin others regarding it. Teach them that there is none worthy of worship except Him only. Indeed, Allah SWT is the one and only god, incomparable with all.” (Refer Tafsir Ibn Kathir, 4:46)

Furthermore, the Prophet PBUH also state in a hadith:

According to the above Quranic and prophetic evidences, it is clear that we are commanded to worship Allah SWT sincerely without any other intentions. Hence, performing acts of worship that Allah SWT has promised certain rewards for it, with the hopes of just attaining worldly gains stipulated is not considered as a good deed.

Consequently, we should contemplate and remember that the blessings of Allah SWT and His rewards in the hereafter is far greater than any worldly gains in this temporary world. Allah SWT state:

“While the Hereafter is better and more enduring.”

Remember that worldly riches are not something that is invaluable nor is it eternal. It will deplete when used. Everything will break and eventually wear out and can no longer be used after some time. How insignificant is the temporary worldly riches when compared to the blessings and riches of the eternal hereafter if one attains the blessings and love of Allah SWT?

According to the discussion above, we would like to state that performing acts of worship just to attain worldly gains is impermissible. The reason is, by doing so, we will no longer performing the worship sincerely for the sake of Allah SWT.

We pray to Allah SWT as stated in the recitation of Iftitah every time we pray, so that we will be sincere in everything that we do:

Say, "Indeed, my prayer, my rites of sacrifice, my living and my dying are for Allah, Lord of the worlds.