AL-KAFI #1326: IS IT NECESSARY FOR A MASBUQ MA'MUM TO REPEAT THE RECITATION OF QUNUT? 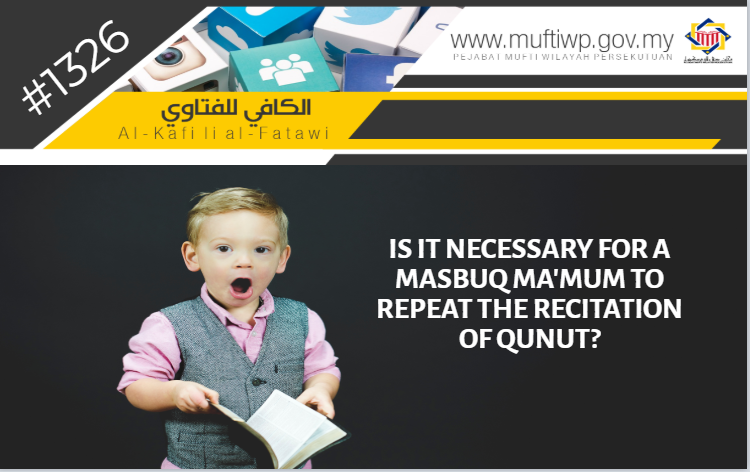 I was late for Subh prayer and only able to pray starting in the second rakaat and recite the qunut together with the imam. When I continue my prayer adding the first rakaat that I missed, is it necessary for me to repeat the recitation of qunut?

Among the evidences of its sanctioning is a hadith from al-Barra’ bin Azib RA:

"The Prophet PBUH would perform the Qunut in the Subh and Maghrib prayers."

Is it necessary for a masbuq ma’mum to repeat the recitation of qunut?

According to Imam al-Syirazi, if a masbuq ma’mum is able to pray together with the imam in the last rakaat of prayer, then the rakaat is considered as the first rakaat for him. This is in accordance with an athar of Saidina Ali bin Abi Tolib RA:

If the prayer consists of qunut, then he must recite the qunut together with the imam and when he stands up to continue his prayer completing one more rakaat, then he should recite the qunut again, the same as when he has already performed the tasyahhud with the imam, he must perform the tasyahhud again when he is completing his rakaat that he had missed. (Refer: Al-Muhazzab 1/180)

According to Imam al-Nawawi, this is the opinion of Sa’id ibn Musayyib, Hasan al-Basri, Ato’, Umar ibn Abd al-Aziz, Makhul, al-Auza’ie and others.

However, according to Imam Abu Hanifah, Imam Malik, Imam Ahmad and al-Tsauri, the rakaat that we are able to follow the imam is our last rakaat and the rakaat that should be replaced is the rakaat in the beginning. This is according to an athar of Saidina Umar al-Khattab RA, narrated by Ibn Umar R.Anhuma:

“The rakaat of you with the imam is the last rakaat of masbuq ma’mum, and the rakaat that is replaced are his first rakaat.”

However, madhab Syafie supported their opinion, presenting a hadith from Abu Hurairah RA:

“The part of the prayer you get (along with the imam) offer it, and the part you miss complete it (afterwards).”

To conclude, masbuq ma’mum need to repeat the qunut even when he has already recited it with the imam when he is completing his missed rakaat.