AL-KAFI #1328: IS IT TRUE THAT WE NEED TO BE ARROGANT TOWARDS ARROGANT PEOPLE? 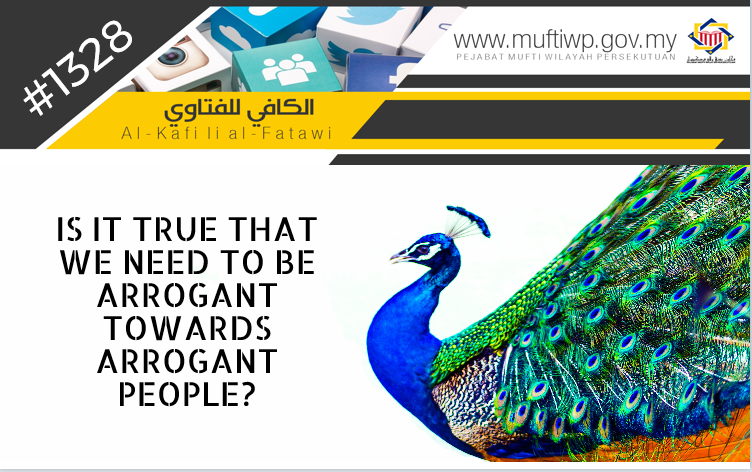 Arrogance is a prohibited attitude in Islam. Allah SWT state in the Quran:

“He who has in his heart the weight of a mustard seed of pride shall not enter Paradise.”

Only Allah SWT reserves the right of being al-mutakabbir. Allah SWT state:

“He is Allah, other than whom there is no deity, the Sovereign, the Pure, the Perfection, the Bestower of Faith, the Overseer, the Exalted in Might, the Compeller, the Superior.”

Acting arrogant towards people who are arrogant

There are words that are claimed to be of the Prophet PBUH’s:

“Being arrogant towards people of arrogance is a form of charity.”

The above phrase is famous in our society, but it is not a hadith.

Syeikh Mulla Ali al-Qari included the narration in the fake hadith category, however he acknowledged that it is a phrase stated by scholars conveying the same meaning. (Refer Al-Asrar al-Marfu’ah fi al-Akhbar al-Maudhu’ah, pg, 163)

In another narration, it is stated as:

The above narration is mentioned by Imam al-Ghazali in Ihyaa’ Ulum al-Din, however, Imam Tajuddin al-Subki did not find a sanad for this narration. (Refer Tobaqat al-Syafi’iyyah al-Kubra 6/354)

Abu Sa’id al-Khadimi commented on the above narration states, originally, being arrogant is prohibited. However, it is permissible for us to be arrogant towards people of arrogance for if we are humble, they will continue with their bad attitude. But, if we are arrogant towards them, he may realize his mistake.

Hence, it is said that showcasing one’s arrogance as a lesson (so that they will realize their bad behaviour) is a commendable act, such as acting haughty in front of people of ignorance and rich people who are arrogant. (Refer Bariqah Mahmudiyyah fi Syarh Tariqah Muhammadiyah, 2/186)

To conclude, the narration regarding acting arrogant towards those who are arrogant is not a hadith, however, it is just the words and opinions of scholars, as stated in the above discussion.

It is permissible for someone to act aloof with the intention of rebuking or advising an arrogant person as a lesson. However, arrogance showcased should not be his true feelings in his heart.

However, in our opinion, it is prioritized to apply the dakwah method that is stated in the Quran. Allah SWT state:

“And not equal are the good deed and the bad. Repel [evil] by that [deed] which is better; and thereupon the one whom between you and him is enmity [will become] as though he was a devoted friend.”

“And the retribution for an evil act is an evil one like it, but whoever pardons and makes reconciliation - his reward is [due] from Allah. Indeed, He does not like wrongdoers.”