AL-KAFI #1361: THE RULING OF MUSLIMS PARTICIPATING IN POLLS REGARDING CHANGING RELIGIONS 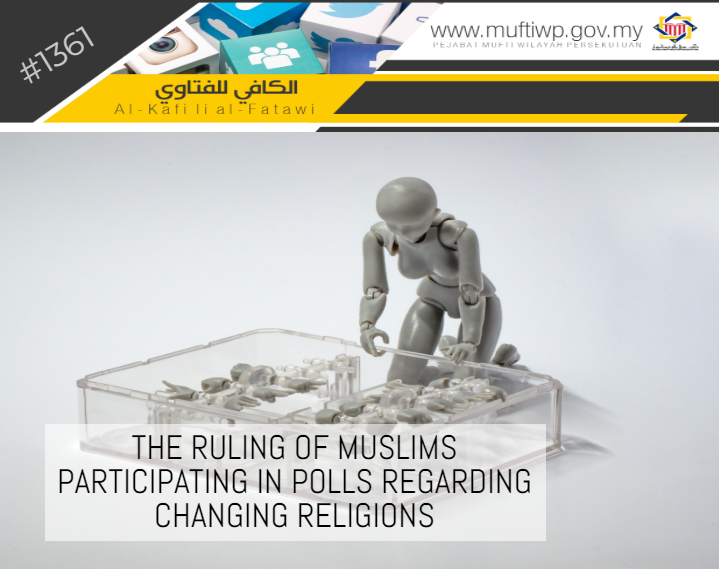 Assalamualaikum SS Datuk Seri Mufti. I want to ask regarding the ruling of a Muslim who participates in Facebook poll that asked: “To all Muslims. If you could change your religion, which religion would you choose? And a list of choices is given such as Hindu, Christian, Taoism and others.” My question is, is this permissible or not?

Hope for an explanation from SS Datuk Seri Mufti. Thank you.

Allah SWT has made Islam as the only true religion that He accepts. Allah SWT state in the Quran:

“Indeed, the religion in the sight of Allah is Islam. And those who were given the Scripture did not differ except after knowledge had come to them - out of jealous animosity between themselves. And whoever disbelieves in the verses of Allah, then indeed, Allah is swift in [taking] account.”

Ibn Kathir commented on the above verse where Allah SWT state that there is no religion that is accepted by Allah SWT except for Islam, which is by obeying all the prophets that are sent by Allah SWT for every nation which ends with the Prophet Muhammad PBUH. (Refer Tafsir Ibn Kathir, 2:25)

In another verse, Allah SWT state that whoever search for another religion other than Islam, then it is not accepted by Allah SWT and on judgement day he will be among the people who are in loss. Allah SWT state:

Coming back to the question regarding the ruling of a Muslim participating in a poll to change religion if he is able to, we would like to emphasize that the act is prohibited according to syarak. The reason is, it is as if someone has the intention to embrace a religion other than Islam and has the determination to be a disbeliever.

Regarding this matter, scholars state that with just the intention to be a disbeliever in the future, then he is already considered as a disbeliever when he has such intentions. Imam Syihabuddin al-Ramli in his book Nihayat al-Muhyat said:

“Or if you have the intention to be a disbeliever tomorrow – as an example – or he is still in doubt to do it or not, then he has already committed disbelief for his rejection or denial of Islam.” (Refer Nihayat al-Muhtaj Syarh al-Minhaj: 7:416)

The same is stated in Hasyiah Jamal ‘ala Minhaj al-Tullab:

“Even if he has the intention to denounce Islam after a hundred years, then he is already a disbeliever (at the time).” (Refer Mu’in al-Hukkam, 1:165)

Hence, anyone who has transgresses and participated in the poll of choosing other religions if he is able to, without a real intention or just for fun, then he should recite istighfar, repent and recite the syahadah again and set the intention to never do it again. Allah SWT state:

“And those who, when they commit an immorality or wrong themselves [by transgression], remember Allah and seek forgiveness for their sins - and who can forgive sins except Allah? - and [who] do not persist in what they have done while they know.”

Hence, we advise all Muslims to not take this matter lightly for it involves our faith and as Muslims we have to believe that only Islam is the true and accepted religion by Allah SWT.

According to the above discussion, we would like to reiterate that the ruling of a Muslim to participate in a poll regarding choosing to change religion is absolutely prohibited. The reason is, it contradicts with the statement of Allah SWT in Surah Ali Imran verse 19 and 89 which explains that the only religion that is acknowledged and accepted by Allah SWT is Islam and the prohibition for Muslims to search for another religion other than Islam.

Furthermore, Muslims who were involved in voting in the poll is somehow showcasing their intention of changing their religion by choosing another religion even if it is done just for fun. This could potentially result in someone to be considered as a disbeliever as explained in the above discussion. Hence, one should repent, recite his syahadah again and never repeat it.

May Allah SWT give us the right understanding in Islam and bless us with guidance in practising His religion the best we could. Amin.