AL-KAFI #1366: IS IT OBLIGATORY FOR A HUSBAND TO PROVIDE SUSTENANCE (NAFKAH) FOR HIS WIFE IF HIS WIFE REFUSE TO FULFIL THE CONJUGAL RIGHTS OF THE HUSBAND? 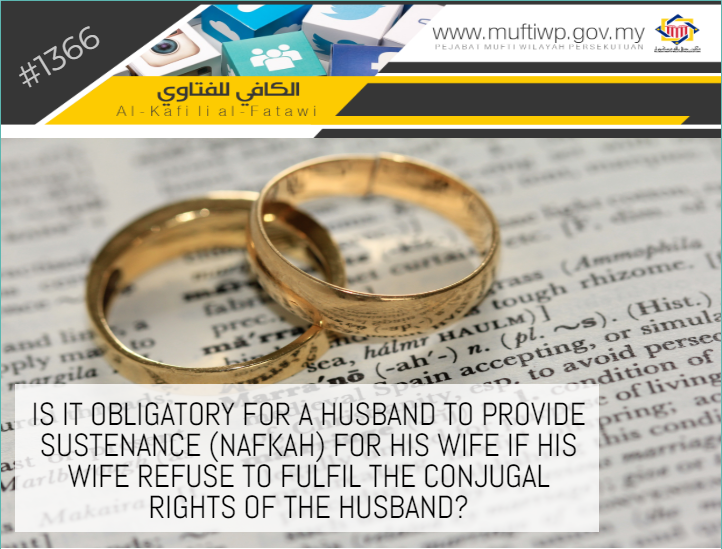 Assalamualaikum Dato’. I want to ask several questions regarding the issues in marriage. For a situation where a wife is negligent in fulfilling the conjugal rights of a husband for almost a year and always refuses when asked to have intercourse by the husband with various excuses and ignores the advice given by the husband regarding matters involving worship to Allah SWT. If the wife acts this way, is it obligatory for the husband to provide sustenance (nafkah) for the wife?

The Wisdom Behind Marriage

The purpose of marriage is to build the family institution and it is greatly encouraged in Islam. Its purpose is to also fulfil the natural needs of humans, increasing the Muslim ummah and nurturing calmness and contentment. The encouragement of marriage in Islam is so that we can benefit from it. This is stated in a hadith from Abdullah bin Amr RA where the Prophet PBUH said:

"The world is but a (quick passing) enjoyment; and the best enjoyment of the world is a pious and virtuous woman"

The same is stated for husband and wife who protect and complement each other. This is stated in the Quran, where Allah SWT state:

Dr Mustafa al-Khin state several wisdoms of marriage in his book, which are:

Nafkah (Sustenance) and Responsibilities of Husband and Wife

Nafkah (sustenance) is human’s necessary expenses such as food, drink, clothing, house (place to live) and others. It is called as nafaqah for it is given or used for these necessities. (See al-Mu’tamad fi al-Fiqh al-Syafi’e, 4/274)

There are numerous Quranic and prophetic evidences that explained the matter regarding nafkah, among them is a statement of Allah SWT:

“Let a man of wealth spend from his wealth, and he whose provision is restricted - let him spend from what Allah has given him. Allah does not charge a soul except [according to] what He has given it. Allah will bring about, after hardship, ease.”

The scholars agreed (reached a consensus) that it is obligatory for a husband to provide nafkah for his wife. This is in accordance with the statement of Allah SWT:

“Mothers may breastfeed their children two complete years for whoever wishes to complete the nursing [period]. Upon the father is the mothers' provision and their clothing according to what is acceptable.”

Nafkah is a condition on a husband when the wife fulfils the conditions set. In al-Fiqh al-Manhaji, it is divided into two conditions:

If all these conditions are fulfilled, then it is obligatory for the husband to provide every nafkah needed by the wife. (See al-Fiqh al-Manhaji: 4/181-182)

Dr Muhammad Zuhaili defined nusyuz as disobedience. And disobedience for a woman is when she disobeys her husband on matters which are made obligatory for her by Allah SWT. (See al-Mu’tamad fi al-Fiqh al-Syafi’e: 4/90)

“But those [wives] from whom you fear arrogance - [first] advise them; [then if they persist], forsake them in bed; and [finally], strike them.”

The act of nusyuz by a wife is prohibited and is considered as one of the major sins. This is as stated in a hadith from Abi Hurairah RA, where the Prophet PBUH:

“When a man calls his wife to come to his bed and she refuses and does not come to him and he spends the night angry, the angels curse her till the morning.”

When there are signs of nusyuz in a person who are acting badly and sour-faced. Or if a wife utters harsh words to her husband. Hence, in al-Fiqh al-Manhaji, ways to overcome this are stated:

If the disagreement is unresolvable, then the case should be presented to a judge. The judge would then appoint a mediator who is a Muslim and fair. And the mediator should try his best to reconcile the husband and wife back together. (See al-Fiqh al-Manhaji 107-108)

According to the above question given, the actions of the wife towards the husband should not have happened. The reason is, it is the responsibility of the wife to attend to her husband the best she could and to fulfil her husband’s needs.

Hence, husband and wife should discuss and find the best resolution. If the wife still refuses to change, then the husband should follow what has been recommended in the Quran. Allah SWT state:

“But those [wives] from whom you fear arrogance - [first] advise them; [then if they persist], forsake them in bed; and [finally], strike them.”

Thus, it is not obligatory for the husband to provide nafkah if the wife neglects her responsibilities towards her husband and committing nusyuz. However, it is best if this matter is presented to authority bodies who are responsible for the process of sulh which is a part of Islamic family law in each state. The purpose of this is so that reconciliation and an agreement could be reached between the husband and wife.

Hopefully, this explanation would benefit the questioner. We pray that Allah SWT give sakinah to our families.