AL-KAFI #1410: THE RULING OF THINKING ABOUT ALLAH 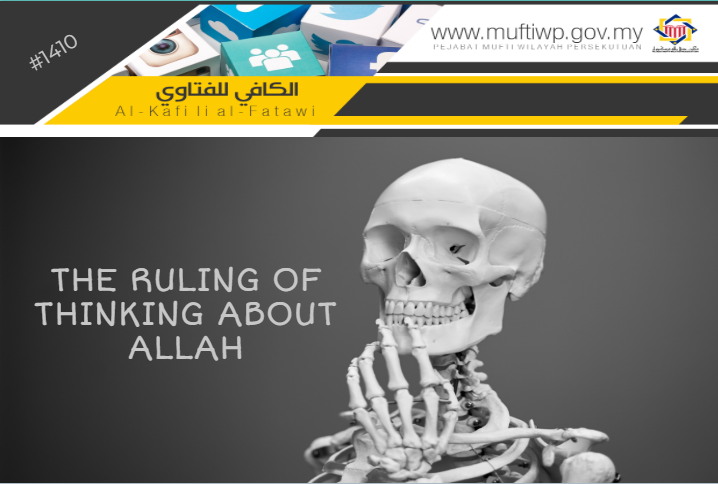 Assalamualaikum SS Mufti. What is the ruling for someone who thinks about Allah?

In term of the first, which is thinking of the essence and attribute of Allah SWT, we state here that there is a narration of Ibn Abbas RA where the Prophet PBUH said:

Say, [O Muhammad], "Travel through the land and observe how He began creation.”

It is because, by thinking and contemplating on the creations of Allah SWT, it may help a person to increase his faith and iman (belief) in the greatness of Allah. This is in accordance with the saying of Allah SWT:

“Who remember Allah while standing or sitting or [lying] on their sides and give thought to the creation of the heavens and the earth, [saying], "Our Lord, You did not create this aimlessly; exalted are You [above such a thing]; then protect us from the punishment of the Fire.”

The same is stated in the saying of Allah SWT:

And in yourselves. Then will you not see?

Imam al-Thabari in his commentary upon this verse said: “The most accurate opinion in explaining the meaning of this verse is: O people! And upon yourself are signs of Allah’s greatness and ‘ibrah which shows you the Oneness of your Creator. Indeed, there is no God except Him. In the aspect of the ability to create the creations. Will you not observe deeply on this matter while contemplating on Him? Verily, you will know the true meaning of the Oneness of your God.” Refer: Tafsir Al-Thabari (22/419).

Moreover, we as Muslims are forbidden by syarak to think of the essence (zat) of Allah SWT due to the limitation of our mind. This is the same as someone who thinks of the shape of Allah; whether He has a matter or mass. So, this is forbidden by syarak. In fact, Allah SWT say:

“There is nothing like unto Him, and He is the Hearing, the Seeing.”

Nevertheless, thinking of Allah SWT through zikrullah by reciting zikr and the Quran is a praised act of good deeds. There are so many encouragements on the remembrance of Allah which are mentioned in the Quran as well as hadiths which are sahih (authentic).

Also, there is a hadith which mentioned the seven people who will be under the shades of Allah SWT on the Day of Judgement as narrated by Abu Hurairah RA where the Prophet PBUH said:

“…a person who remembers Allah in seclusion and his eyes get flooded with tears,”

As a conclusion, we state here that if thinking of Allah SWT means thinking about the essence of Him, then this is prohibited. However, if this means the remembrance through zikrullah and recitation of the Quran, then this is highly encouraged and commanded.

Lastly, may Allah SWT give us the true understanding in this religion. Ameen.