AL-KAFI #1411: IS ZAKAT WITHOUT AKAD (PRONOUNCEMENT FOR ZAKAT) VALID? 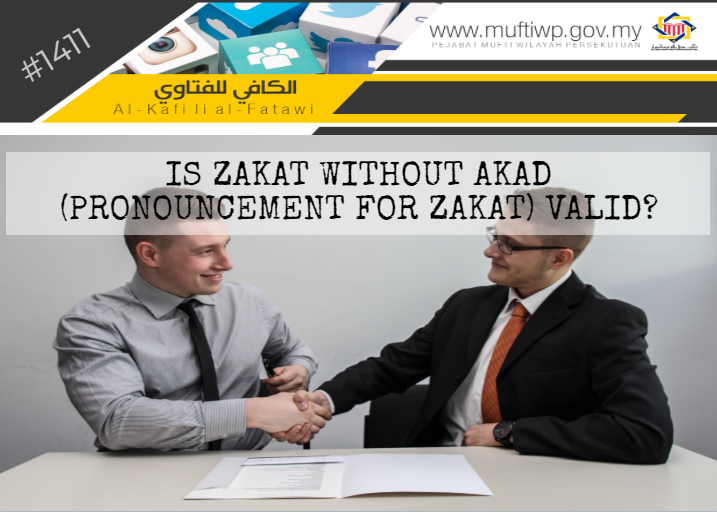 Assalamualaikum SS Dato’ Seri Mufti, I have a question, other than zakat fitrah, is the pronouncement of akad for other zakat obligatory?

Zakat is an obligatory worship and one of the pillars of Islam which is sanctioned on the second year of Hijrah. This is stated in a hadith from Ibnu Umar RA:

“Allah's Messenger (way peace be upon him) prescribed the payment of Zakat-ul-Fitr (on breaking the fast) of Ramadan for people, for every freeman, or slave, male and female among the Muslims-one sa' of dried dates, or one sa' of barley.”

The jurists explained that zakat is an obligatory charity. This is in accordance with the statement of Allah SWT:

Dr Wahbah al-Zuhaili said, according to the scholars’ opinion, what is meant in the above verse is that zakat is an obligation for all mankind. (See Tafsir al-Wasit li Zuhaili: 1/913)

Dr Wahbah Zuhaili state there are obligatory and valid conditions for zakat. Thus, zakat is obligatory for a Muslim who is free, has reached puberty, rational, the ownership on the property’s total is sufficient (according to the nisab) and the property is owned for certain set period of time (according to the haul) and the zakat is valid with just the intention, fulfilling its obligation. (See al-Fiqh al-Islami wa Adillatuhu, 3/1796)

Intention is the determinant of something as an act of worship and it differentiates each act of worship from another act of worship, for example, zakat and kafarah. This is as stated in a hadith from Saidina Umar al-Khattab RA, the Prophet PBUH said:

“(The value of) an action depends on the intention behind it. A man will be rewarded only for what he intended.”

According to the opinion of madhhab Imam Syaf’ie, it is obligatory to set the intention in one’s heart and it is not a condition for it to be pronounced, such as “This is my property zakat,”, even though the intention does not state that it is obligation, for zakat is an obligation. (See al-Fiqh al-Islami wa Adillatuhu, 3/1811)

As for the opinion of Imam al-Nawawi, he stated that the ruling for charity is the same as a gift and it does not need for the pronouncement of ijab and qabul. It is sufficient with the giving and accepting of the property and this is the authentic opinion in madhhab Imam Syafi’e and this is also the chosen opinion by contemporary jurists. (See Raudah al-Thalibin,5/365-366)

Coming back to the above question, the payment of zakat is valid even without the pronouncement of ijab and qabul. The reason is, the valid condition for zakat is intention and having the ownership of the property as well as the act of giving and accepting of the property.

However, it is not an issue if the ijab and qabul is pronounced, ensuring that the purpose and aim of the zakat is fulfilled. Thus, sincerity and contentment are necessary in attaining the blessing and acceptance of Allah SWT. Allah SWT state:

“And they were not commanded except to worship Allah, [being] sincere to Him in religion, inclining to truth, and to establish prayer and to give zakah. And that is the correct religion.”