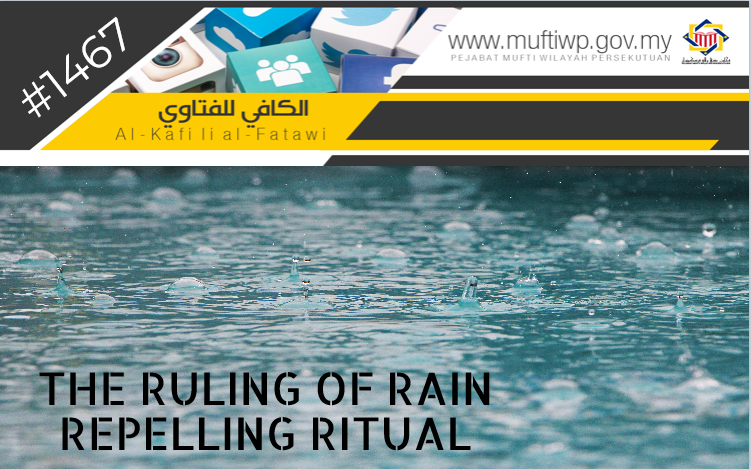 Assalamualaikum SS Mufti, I want to ask regarding the ruling of rain repelling ritual that is performed in certain places. Is this permissible according to syarak?

First and foremost, we should first explain what is meant by rain repelling ritual. This is in accordance with a famous Islamic legal maxim:

Rain is a form of blessing from Allah SWT sent down to the earth for His slaves. There are several guidances taught by the Messenger PBUH of what a person should do when it is raining. Among them is a narration by Umm al-Mu’minin ‘Aisyah R.Anha, where she said the Prophet PBUH would recite the following du’a when it is raining:

Whereas when the rain stops, it is sunnah for us to recite:

“We have had a rainfall due to the Grace and Mercy of Allah,”

Coming back to the above presented question, if it is meant to just be a supplication asking a heavy and continuous rain to stop, then there is a syarak discussion on the matter. According to a hadith narrated by Anas bin Malik RA, he said:

While the Prophet (ﷺ) was delivering a sermon on a Friday, a man stood up and said, "O Allah's Messenger (ﷺ)! Invoke Allah to bless us with rain." (The Prophet (ﷺ) invoked Allah for rain.) So, the sky became overcast and it started raining till one could hardly reach one's home. It kept on raining till the next Friday when the same man or another man got up and said (to the Prophet), "Invoke Allah to withhold the rain from us, for we have been drowned (with heavy rain)." The Prophet (ﷺ) said, "O Allah! Let it rain around us and not on us." Then the clouds started dispersing around Medina and rain ceased to fall on the people of Medina.

In conclusion, we would like to state that if rain repelling ritual meant is through supplication to move the rain, then it is permissible. This is considering the fact if the rain has been falling heavily and continuously for a long time, which would harm plants and farms, flooding and hardships and destruction to the general public.

However, if the meaning of rain repelling ritual is certain superstitious rituals practised by society and customs such as by erecting a broom towards the sky, throwing bridal gown on top the roof and others, then all these superstitious acts are HARAM and contradict the teachings of Islam. Thus, we advise the Muslim ummah to avoid these practices and only perform matters that have been sanctioned to be in line with the guidance of Islam which is pure and clean.

Lastly, we pray to Allah SWT to be given an accurate understanding in practising this religion. Amin.