AL-KAFI #1468: IS IT PERMISSIBLE TO HAVE WIVES LIVING UNDER THE SAME ROOF? 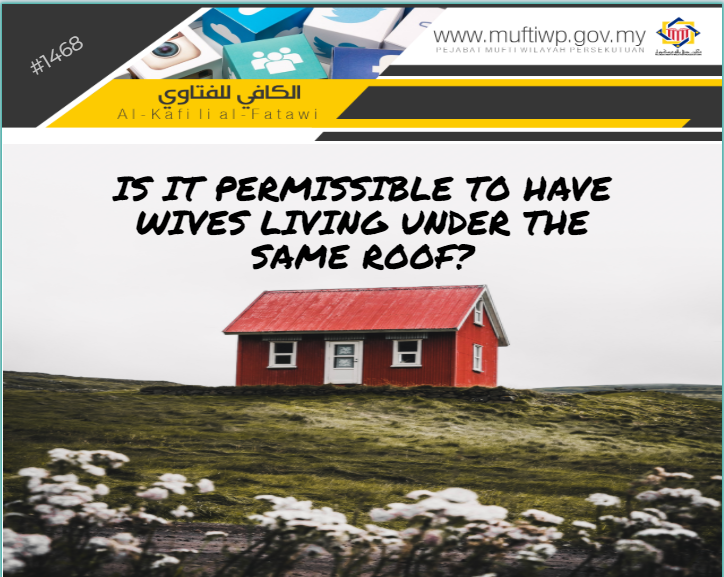 Assalamualaikum SS Dato’ Seri Mufti. Is it permissible to have wives living under the same roof?

Basically, if a wife puts the condition of not being placed with the other wives, then the husband is obligated to fulfil it. This is in accordance with a hadith narrated by Uqbah bin Amir where the Prophet PBUH said:

Pertaining to having wives to live under the same roof, Imam al-Ghazali in his book al-Wasit has stated: Regarding to the place of living, it is impermissible to gather two wives in the same place except if it is segregated (appliances, basic necessity and etc). Indeed, its harm is clear. (Refer al-Wasit fi al-Mazhab, 5/290)

Syeikh al-Islam Zakariyya al-Ansari then states: “What is meant by place of living is what is necessary for a woman (wife) which consists of house and room. The most appropriate house is to not gather them under one roof. While an appropriate room is by not gathering them under the same room. Even if it is needed to be gathered under the same room, then each and every person should have their personal space equipped with their own appliances.” (Refer Syarh al-Bahjah al-Wardiyyah, 15/233)

The same when he states: “To gather two wives under the same roof which is appropriate for them both, (one should) prepare sufficient separate necessities for them both like toilet, washroom, the entrance that it becomes seemingly like two houses. If the necessities are not separated, then they cannot be gathered together, even for one night except with their consent.” (Refer Syarh al-Bahjah al-Wardiyyah, 15/233)

Ibn Qudamah al-Maqdisi stated: It is impermissible for a husband to gather his two wives in one place of living without their consent, whether it is small or big. This is because this will cause harm to them both due to animosity and jealousy between them.

Based on the above statement, originally, it is the responsibility of a husband to segregate the place of living for his wives. In fact, the wife has a right to set the condition of not being placed in the same place as the other wives because a house is one of the rights of a wife.

However, it is permissible to gather the wives under the same roof with the condition that it must be equipped with separate personal appliances for each wife like bedroom, washroom and the like. And it is best to have the consent of each wife.

Still, we suggest one to make the Prophet PBUH as qudwah and uswah (example) in which the Prophet PBUH segregated his wives as mentioned in surah al-Hujurat which means separated rooms or houses for the ummahat al-mukminin.

May Allah SWT bless us with correct knowledge and understanding in practicing His every commandment.