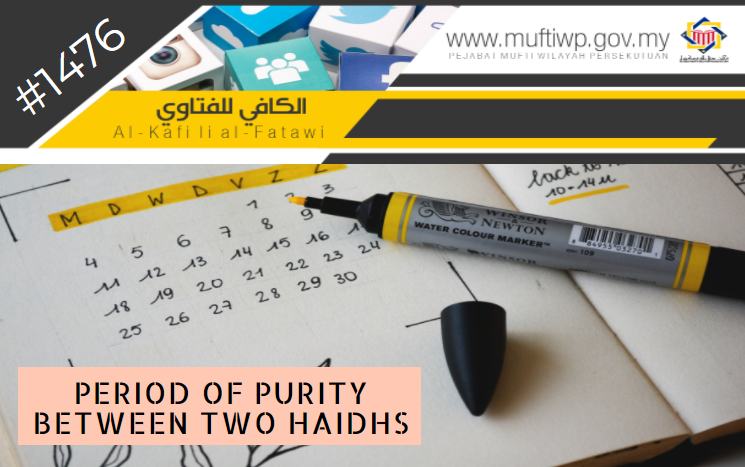 Assalamualaikum. I am confused to determine between the period of time for istihadhah and haidh. How can we know the next menstrual cycle (haidh) after istihadhah? Hope for an explanation from ustaz. Thank you.

As an introduction, we bring first the meaning of haidh and istihadhah according to syarak to settle the confusion between these two.

Haidh (menstruation) according to syarak is a natural discharge of blood from vagina of a woman while she is healthy for certain period of time. [al-Wajiz fi al-Fiqh al-Islami 1:118 ]

While istihadhah according to syarak is an irregular discharge of blood from the lowest vein located under the uterus which is known as (العاذل) after the longest period of normal menstruation cycle, postpartum bleeding or blood discharges continuously after the normal menstruation cycle. [al-Wajiz fi al-Fiqh al-Islami 1:126]. Next, istihadhah is:

From the definition of istihadhah as well as its characteristics, it can be concluded that it is an irregular discharge not at the normal period of menstruation or postpartum bleeding or in other words, it is during a woman in pure state.

Next, referring to the next question on menstruation, we would like to explain the method to count the period of pure. This is to know the days which are the gap between one cycle of haidh and the other:

The counting of the period of pure between two haidhs

For example, Woman (A) discovers that her menses discharge on 1-12 of August which is 12 days long. Then, after a week, blood discharges on 19th August. So, the blood is considered as istihadhah. This is because the blood discharges during the gap of the minimum period of pure. Hence, it is wajib for her to perform obligatory prayer by wearing a sanitary pad after washing her private parts, and to take ablution for each obligatory prayer without having to perform an obligatory bath. However, when she reaches the 29th August which is the minimum period of pure ends which is 15 days after ending the last menstruation cycle. So, the second menstruation cycle is considered starting again if on 29th August there still is a blood discharge. Hence, the discharge is the start of the new menstruation cycle. The following is the table for this woman (A) cycle:

Further reading on the colour of istihadhah blood can be read at Al-Kafi #685: Istihadhah Blood; in accordance with Tamyiz or Adat?

In conclusion, the method of counting the period of pure between two haidhs is highly important to differentiate between blood discharges during the haidh period or istihadhah which discharges during the period of pure. In addition, the ruling of istihadhah women (mustahadhah) is the same as women in a pure state and she is permitted to perform the acts of worship like fasting, prayer, i’tikaf and reciting al-Quran. Lastly, may this guide give us some guidance and let’s pray for us to be given the correct understanding of religion. Ameen.