AL-KAFI #1479: IS IT PERMISSIBLE FOR THE BRIDE AND GROOM TO FOLLOW OTHER MADHHABS’ CONDITIONS OF ABLUTION FOR THEIR WEDDING CEREMONY? 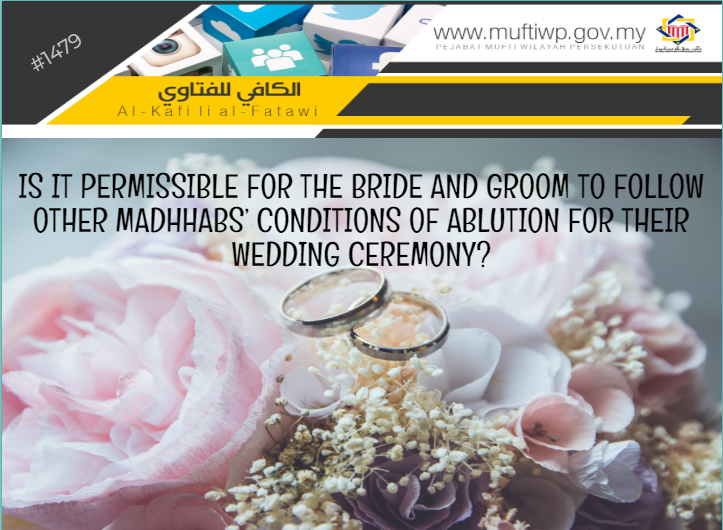 There is a difference of opinions among the scholars regarding changing from one madhhab to another. Hence, it is best to view some discussions pertaining to the terminologies used in this context.

The Public Hold on to (Taqlid) Particular Madhhab

The jurists (fuqaha’) have differing opinions on the public’s taqlid to a particular madhhab. Dr Wahbah al-Zuhaili in his book stated the differences of opinion regarding this:

So, according to the asoh (most selected) opinion, it is permissible to hold on to a different opinion from his madhhab by following another madhhab.

Besides, the public who hold on to a madhhab as long as he has not reached the level of mujtahid to decide on rulings as well as using the dalil perfectly. This is what is meant by Dr Ramadhan al-Buthi in his book:

“Indeed, taqlid of the public or whoever does not have the capability yet to do ijtihad is by holding on to any madhhab of a imam mujtahid whether holding on to a particular madhhab or he lives by changing from one madhhab to another.”

In al-Mausu’ah al-Fiqhiyyah, it is stated that the majority of the jurists (of usul al-fiqh) state that it is permissible for a person, even it is obligatory (wajib) to taqlid for the public. This is because, the imam mujtahid’s opinions might be right or wrong, and if it is wrong, then it will not be sinful for those who follow him. (Refer: al-Mausu’ah al-Fiqhiyyah al-Kuwaitiyyah, 13/160)

Majority of the scholars are of the opinion that taqlid is wajib for the public. This is as stated by Ibn Abd al-Bar: The public should taqlid to their scholars on matters happened to themselves. This is because, the scholars have a clearer understanding of arguments (dalil), and the arguments also did not reach them due to having any knowledge upon it. (Refer: Sifat al-Mufti wa al-Mustafti translated in Malay by PMWP, 205)

Talfiq is combining the imam mujtahids’ opinions in one matter. This is as stated by Dr. Wahbah al-Zuhaili in his book:

“Practicing something not stated by the Mujtahid is practising something following a madhhab then in another issue, he practices one of two requisites or some or more from two opinions. Until he reaches a matter (practice) which is differed among the Imam Mujtahids.” (Refer: Usul al-Fiqh al-Islami, 1/1143)

And what is meant by talfiq between various madhhab is “Holding on valid points in a particular ruling by following two different madhhabs while combining the invalidators in the same ruling”. (Refer: al-Mausu’ah al-Fiqhiyyah al-Kuwaitiyyah, 13/294)

This is as the example presented by Dr Wahbah al-Zuhaili in his book. A person who holds on madhhab al-Syafi’e in wiping parts of the head in ablution and at the same time holding on madhhab Hanafi or Maliki on doings that do not invalidate the ablution while touching an ajnabi, then he performs the prayer. Even on this matter, the Imam Mujtahids do not recognize his ablution as valid. This is because Imam al-Syafi’e is of the opinion that his ablution is invalidated by touching (having skin contact with) the ajnabi while Imam Hanafi is of the opinion that the ablution of an individual is invalidated if he does not wipe a quarter part of his head.

Dr. Wahbah al-Zuhaili concluded in his book that there are details in the practice of talfiq madhhab whether it is permissible or not divided according to some situations:

Talfiq which is permissible is due to necessity or exigent situation (darurat). Not for simple matters and for the purpose of taking things lightly without any Shari’ah need. And talfiq is only allowed on certain rulings in ibadah and muamalah which come from ijtihad of the imam and not on matters that are qat’ie.

One who holds on any madhhab to follow his desire. Dr Wahbah al-Zuhaili stated in his book that Tatabbu’ al-Rukhas is one who holds on opinions from different madhhabs based on his wants and desire when a certain issue arises.

Ibnu Abdul Bar stated that the scholarly consensus (ijma’) is of the opinion that it is impermissible for the public to practice tatabbu’ al-rukhas.

Izz bin Abd al-Salam is of the opinion that it is permissible for the public to practice easy practises of different madhhab. And those who refute this means he is an ignorant (jahil), as taking what is easy is a praised act and this religion is easy as Allah SWT state in the Quran:

“and (He) has not placed upon you in the religion any difficulty,”

The scholars have differing opinions on this matter which are:

Another example for tatabbu’ al-rukhas is like a person who marries without having wali (legal guardian), mahar (dowry) and witness. Marriage without these three altogether is invalid according to the scholars of madhhab.

(Refer: Al-mufti wa al-Mustafti translated into Malay by the office, 208)

Referring back to the above question and discussion, we can conclude that these following guidelines should be taken into consideration before changing to a different madhhab:

You may also refer to the article: AL-KAFI #474: MENGGABUNGKAN BEBERAPA MAZHAB DALAM SATU JENIS IBADAH (COMBINING DIFFERENT MADHHABS IN ONE ACT OF WORSHIP)

Hence, in this issue, we conclude that it is compulsory for the public to taqlid to his imam madhhab like the normal practice of ablution in madhhab al-Syafi’e. This is a precaution in practising something and abstaining oneself from indulging in one’s own desire and combining the madhhabs which is prohibited.

May Allah SWT give us a true understanding of His religion as well as taufiq and hidayah to practice His Shari’a well.