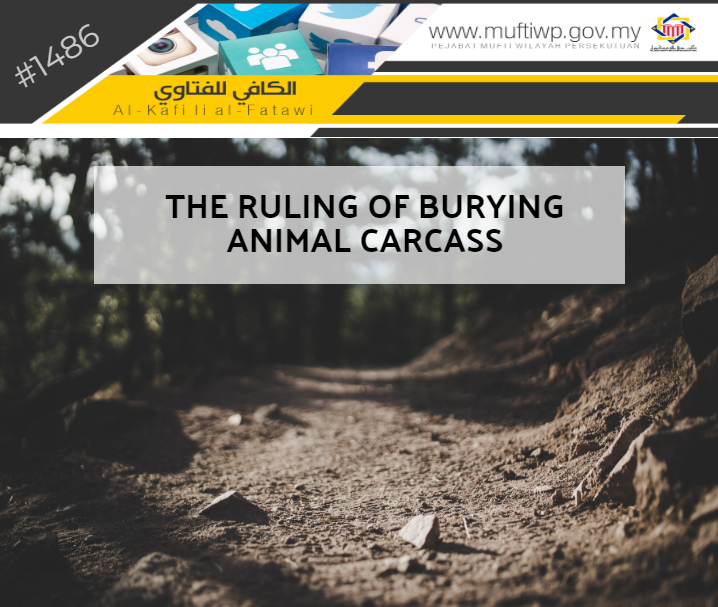 Assalamualaikum SS Datuk Mufti. I want to ask a question what is the ruling of burying animal carcass? Is it supposed to be buried like the burial of humans or how should we bury it?

Basically, there is neither specific ruling in the management of animal carcass burial nor that it should be managed the same way as humans are; in terms of bathing, shrouding or funeral. There is no evidence from the Quran or hadith of the Prophet PBUH that clearly explains it. However, there is a related athar of the Prophet PBUH, where Ibn ‘Abbas said:

The freed slave-girl of Maimuna was given a goat in charity but it died. The Messenger of Allah (ﷺ) happened to pass by that (carcass). Upon this be said: “Why did you not take off its skin? You could put it to use, after tanning it.” They (the Companions) said: “It was dead.” Upon, this he (the Messenger of Allah) said: “Only its eating is prohibited.”

Through this hadith, we understand that the Prophet PBUH did not instruct the carcass to be buried quickly, but he suggested the companion take benefit from the animal first. Thus, the lesson from this narration and athar is that it is not sanctioned to bury the carcass of an animal, for because if this is so, surely the Prophet PBUH would have instructed the companion to quickly bury the carcass, for the attribute of a Messenger is to convey and not stay silent if a transgression is happening in front of his eyes.

“O Messenger, announce that which has been revealed to you from your Lord,”

In short, Islam does not sanction an obligation of burying the carcass of an animal, it is permissible to be buried or left without burying it.

However, what’s important in this matter comes back to the benefits people can get from the carcass, whether the carcass should be buried or left without being buried and also whether it will cause harm to the people and other creatures in the vicinity if it is left and not buried. It is well-known that if the carcass of an animal is not buried, then it will start to rot and this will be the cause of the spread of bacteria and virus that will lead to various diseases. Besides, it will also result in an unpleasant smell and a less than pleasant sight, especially if it is left in public places such as the mosque, residential areas and others. Thus, these matters are a great harm that should be removed and distanced from us.

Thus, the ruling of burying animal carcass becomes wajib and it should be buried properly. This is also related to the Islamic legal maxim which states سد الذرائع (closing the doors of harm). (See al-Furuq; 2/32). Thus, it is sanctioned to bury animal carcass to remove the harms for humans and not just because of its death.

According to Fatawa al-Lajnah al-Da’imah, when they are asked regarding animal carcass whether it is necessary for animal carcass to be buried or left on land? They answered:

“The affairs of the matter (burying a carcass) because there is no evidence that shows the sanctioning of burying it (animal carcass) and there is no prohibition or restriction against it, however, it is prioritized to bury it so that it will not harm others.” [See Fatawa al-Lajnah al-Da’imah; 8/443,444 (5409)]

As a conclusion, it is wajib to bury animal carcass if it is harmful to humans and it is not wajib to do so if it is not harmful. However, it is prioritized to bury the carcass to completely remove any possibility that it could harm others at the same time preventing it from becoming an eyesore or block the road of people who passes by it. From Abu Hurairah RA, the Prophet PBUH said:

“Faith has over seventy branches or over sixty branches, the most excellent of which is the declaration that there is no god but Allah, and the humblest of which is the removal of what is injurious from the path: and modesty is the branch of faith.”

Lastly, may Allah SWT keep our faith strong and guide us as well as grant us understanding when we are learning and ease our lives. May Allah SWT accept all our deeds.