AL-KAFI #1488: THE RULING OF SELLING E-LIQUID FOR E-CIGARETTES 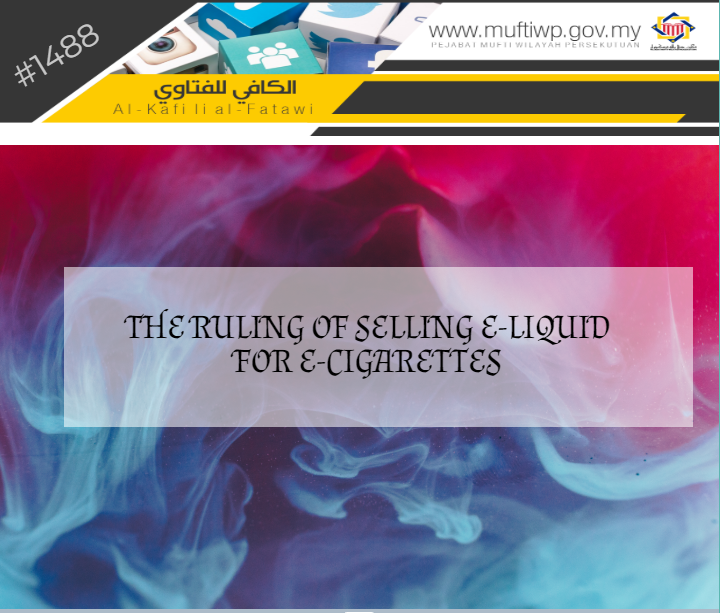 I’m planning to open a business that sells e-liquid or e-juice for vape/e-cigarettes. However, I read somewhere that smoking vape/e-cigarettes is haram. If I continue with my plan of selling e-liquid/e-juice, does this means that the profit that I get would also be considered as haram? Does it also mean that the provision that I get from this business will not be blessed for myself and my family? Hope to get an answer to my question. Thank you.

E-liquid or is also known as e-juice comes in various flavours and can be stored in the refillable electronic cigarette tank. There are several scientific researches that prove e-liquid or e-juice is harmful to health, among them are:

E-liquid or e-juice have been scientifically proven to be the cause of diseases. The target market for e-liquid would surely be for e-cigarettes smokers. This would, in turn, encourage smokers to try various harmful flavours. Thus, this business would lead to roads of harm to mankind. Islam prohibits actions that could lead to harm and destruction. This is in line with the following evidence:

Moreover, the sale of various flavoured e-liquid is (ma’qud ‘alaih) which do not have any benefit. This contradicts the condition of sale that something must be of benefit according to the syarak. This means the sale of unbeneficial thing is invalid. Allah SWT prohibit selling haram things which is clearly unbeneficial as stated in a hadith narrated by Jabir bin Abdullah. He heard the Prophet PBUH said on the day of the Conquest of Mecca. The Prophet PBUH said:

"Allah and His Apostle made illegal the trade of alcohol, dead animals, pigs and idols."

Furthermore, the fatwa of the prohibition of electronic cigarettes is according to the argument that its ingredients are harmful. Thus, any transactions and profit from a prohibited matter such as e-liquid is impermissible. This is in accordance with the statement of the Prophet PBUH:

“Indeed, whatever that Allah prohibits, He also prohibits its price.”

Whatever that leads to haram is haram.

The same is applicable for anything that is haram then the purpose for it is also haram. This is in accordance with the maxim:

“All wasilah (method) for it follows the ruling of the purpose of it.”

To conclude, we conclude the above discussion with the following advice:

Seeking sustenance for one’s family from what is halal is blessed and an obligation for the Muslim ummah. Indeed, Allah SWT guarantees the sustenance of His slaves by opening the halal according to the statement of Allah SWT:

“And He has subjected to you whatever is in the heavens and whatever is on the earth - all from Him. Indeed, in that are signs for a people who give thought.”

The above verse shows that a wide variety of the halal matters that He created to be of benefit for mankind. Furthermore, Allah SWT promised facilitation in seeking sustenance for those who are on the road of taqwa as He stated in the Quran:

“…And whoever fears Allah - He will make for him a way out. And will provide for him from where he does not expect.”

Lastly, believe that the sustenance of Allah SWT is great and vast. Hopefully, we will build our lives according to the shariah of Islam and are blessed with guidance in seeking His blessings.