AL-KAFI #1489: THE RULING OF ELECTROFISHING 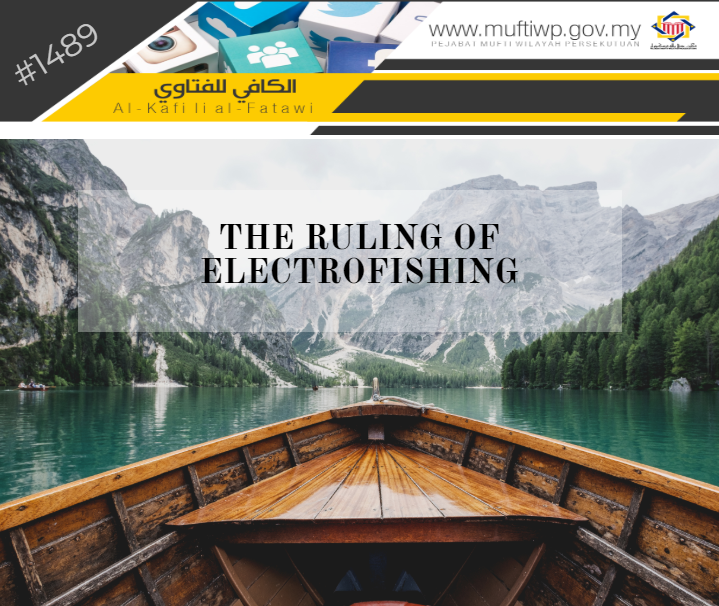 Assalamualaikum SS Datuk Mufti. I have a question; my friend suggested the method electrofishing for it is easier and I could catch a lot of fish. However, isn’t this method a form of us hurting the fishes and is it permissible to eat the fishes that have been shocked with electric?

Hunting or angling is originally permissible unless there is evidence that prohibit them. The same is for the ruling of fishing, it is permissible in Islam. This is in accordance with the Islamic legal maxim stated in al-Mausu’ah al-Fiqhiyyah:

The original ruling of hunting is permissible except for those who are in ihram or is in the Holy lands as stated in the book, sunnah, ijma’ and qias. (See al-Mausu’ah al-Fiqhiyyah al-Kuwaitiyyah, 28/114)

Likewise, for anything that is made halal by Allah SWT, which are from the animals of the sea. Allah SWT states:

“Lawful to you is game from the sea,”

There are numerous ways to fish, from angling, setting up a trawl and others. Thus, the method of fishing should not contradict the syara’. It is an obligation for a person to follow what has been set by syara’. As an example, fishing is permissible but if the method of fishing contradicts syara’ such as if it involves cruelty or illegal activities, then it is haram to do so.

This matter is as if committing transgression or cruelty with the purpose of seeking the blessings of Allah SWT. Allah SWT prohibits the ummah from damaging or harming the earth as stated in His statement:

"Eat and drink from the provision of Allah, and do not commit abuse on the earth, spreading corruption."

In another statement of Allah SWT:

“Corruption has appeared throughout the land and sea by [reason of] what the hands of people have earned so He may let them taste part of [the consequence of] what they have done that perhaps they will return [to righteousness].”

Dr Wahbah Zuhaili explains about corruption here is because people chase the worldly matters. And thus, because of the corruption that they did, they will face the consequences in this world before receiving the punishment of Allah SWT in the hereafter. (See al-Tafsir al-Munir li Zuhaili, 21/97)

The Prohibition of Electrofishing

Electrofishing is a method of fishing by placing the electrodes in water. The purpose is to kill or stun the aquatic life that lives in the area of the electric shock which includes fishes big and small as well as other marine life.

This method of fishing would affect marine life and could lead to the extinction of marine life. Islam prohibits this ummah from harming himself or others. This is as narrated by Ibnu Abbas RA, where the Prophet PBUH said:

Ibnu Abd al-Bar stated in his book, the words of the hadith is general and is used in most of our daily matters. (See al-Istizkar, 7/191)

Thus, the Malaysian government has banned the use of electric current to fish. This is as stated in the Fisheries Act as the following:

(a) uses or attempts to use any explosive, poison or pollutant, or any apparatus utilizing an electric current, or any prohibited gear, for the purpose of killing, stunning, disabling or catching fish, or in any other way rendering such fish more easily caught;

shall be guilty of an offence.

Thus, obeying the law set by the government is an obligation as long as it does not contradict the syara’ ruling. The reason is the government understands the situation of a certain country and considered the public interest.

Imam Suyuti in his book states the maxim:

The policy of an imam (authority or government) on the people or citizen is bound by the benefit. (See al-Ashbah wa al-Nazair li Suyuti, 1/121)

Coming back to the above question and arguments, we would like to conclude here that the usage of any instrument of electric shock is haram for it harms the ecosystem of marine life that could lead to the extinction of aquatic life.

Furthermore, the use of electric shock or electrofishing will also affect other animals or aquatic life in the vicinity. This includes animals of which of no benefit to the captor. Islam prohibits us from killing animals unnecessarily and this is a form of excessiveness.

From a hadith narrated by Amru bin Syarid RA, the Prophet PBUH said:

“Whoever kills a small bird for no reason, it will beseech Allah on the Day of Resurrection saying: O Lord, so and so killed me for no reason. And he did not kill me for any beneficial purpose.”

Moreover, it is illegal in the laws of Malaysia and whoever found guilty is punishable by law.

May Allah SWT give us sahih understanding in His religion and guide us to practise His shariah the best we could.